Inner peace in a conflict zone

Tel Aviv, Israel -- One of the leading teachers of meditation in the Western world has recently concluded his first visit to Israel. Jack Kornfield, a 62-year-old American Jew, is one of a handful of spiritual teachers who have brought Buddhist philosophy and Vipassana meditation techniques to the West. 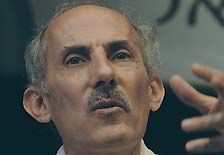 << SEEING THINGS. 'What I found here is that there is an almost invisible web of more than hundreds of good-hearted Israelis, Palestinians, Jews, Muslims, Christians and Druse, who are longing for peace and reconciliation.'
Photo: Roberto Chernitsky

Vipassana, an ancient Pali word, means "seeing things as they really are" or "insight." The meditation technique of the same name is believed to have been discovered 2,500 years ago by Siddhartha Gautama - better known as the Buddha.

The technique stresses self-transformation through self-observation and introspection, focusing on the deep connection between the body and the mind. Vipassana holds that this mind-body connection can be experienced by paying disciplined attention to inhaling and exhaling and to physical sensations.

Although commonly associated with religious Buddhism, Vipassana is a non-sectarian technique that is taught and practiced by people from all religions, races and backgrounds.

Decades ago, Kornfield spent five years as a Buddhist monk in various monasteries around Thailand, Myanmar (formerly Burma) and India. When he returned to the US in 1972, he co-founded the Insight Meditation Society in Massachusetts with fellow teachers Sharon Salzberg and Joseph Goldstein.

Kornfield - widely known for several books on spirituality, including A Path with Heart: A Guide Through the Perils and Promises of Spiritual Life and After the Ecstasy, The Laundry - was invited to Israel as a guest of Tovana, a local non-profit organization that runs meditation retreats. Tovana ("insight" in Hebrew) does not charge for these retreats, which are financed by donations and run entirely by volunteers.

"One of the blessings of meditation is that once you become very quiet and deep, you drop below the levels of identity that we make, such as 'I am a man,' 'I am a woman' or 'I am a Muslim,' 'I am a Jew.' You feel the humanity… that we all share, and to recognize that in a deep way… changes the way you relate to everybody," Kornfield told Metro.

"Here in Israel, there are so many differences [stemming from] identity. The question for us as human beings is how can we respect identity, but also see that it is not the whole truth, and that there is a deeper truth we all share."

When asked if he thought there was a correlation between the difficult political situation and the growing interest in meditation in Israel, he replied, "I think that could be so. When things are tense and difficult, something in us really longs for peace inside ourselves.

"When you start to sit in meditation, you find that all the news you listen to and all the conflict is within you now. So to meditate is really to face all these things and to slowly dissolve them.

"Mindfulness meditation is very widespread in the US. It has been used in medical schools, school systems, prisons, and different universities. These are not 'Buddhist' in the traditional sense at all," he said.

Offering a positive outlook on the gloomy Middle East conflict, Kornfield quoted Vietnamese Zen master Thich Nhat Hanh: "When the boats are caught in rough seas or storms, the people may panic, and boats may sink. But if even one person aboard can remain calm, lucid, knowing what to do and what not to do, he or she can help the boat survive."

Kornfield concluded his visit with a lecture before more than 900 people at Tel Aviv's Gesher Theater. After explaining why meditation is so necessary to remain calm and focused in today's materialistic and stressful lifestyle, especially in a conflicted country such as Israel, Kornfield led the audience in a demonstration.

He told those present to close their eyes gently, and focus their attention on their breath, as it came in and went out. He explained that many thoughts distracted us from our breath, and that attention must always be brought back to breathing.

During a break, many people who had had no previous experience with meditation could be heard talking enthusiastically about their short experience.

Kornfield told the audience that he was "very honored to be here, and quite pleased to see so many of you. I'm honored to be in Israel. To come to this land, to Israel and to the West Bank, Palestine, I've come in many ways just to listen and to learn."

"You've had so many teachers come, the Dalai Lama has come, Thich Nhat Hanh, the Pope, George Bush [the crowd laughed at the last name]. All trying to fix the Middle East. I think that's not the right approach for me. I'm basically here to learn and to see."

He said that the US media tended to report only one aspect of the Israeli-Palestinian conflict - usually reports of violence.

"When I told people I'm going to Israel, they said 'Don't go, its too dangerous!' Smart, sensible people thought it was dangerous to come." Kornfield said that over the past few weeks, he had met with the Jerusalem Peace Makers, the Holy Land Trust (an organization that teaches non-violence in the Palestinian community), Rabbi Menahem Fruman of Rabbis for Human Rights, Israeli-Palestinian Bereaved Families for Peace, and the Women's Interfaith Movement. He also participated in a meeting between Arabs and Jews at Neveh Shalom.

"I even got to meet [right-wing activist] Baruch Marzel, a very interesting man [the crowd laughed again.] What I found here is that there is an almost invisible web of more than hundreds of good-hearted Israelis, Palestinians, Jews, Muslims, Christians and Druse, who are longing for peace and reconciliation."

Kornfield received no remuneration for the lecture, as all profits were donated to Tovana and to several projects that aim to introduce meditation into Arab society, in which meditation teachings receive less exposure than in modern Israeli culture.

Addressing human suffering in general, he said that modern science has shown that there was no solution to some of the more serious problems faced by humankind. "Modern medicine and science cannot stop war, racism and conflicts. Nothing in the material world can do this. We, as human beings, need to understand each other in a new way," he said.