'I restore murals in Afghanistan'

Tokyo, Japan -- The worst thing about my work restoring ancient Buddhist cave murals at Bamiyan in Afghanistan is the fear of setting off landmines laid by the Taliban. The caves are in cliffs next to where the Taliban destroyed the two great Buddhas in 2001, and when it rains or the snow melts the mines can come tumbling down the cliffs. 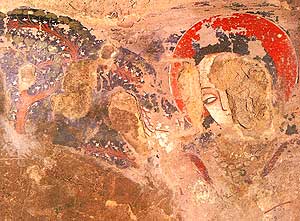 I'm part of a team helping to conserve three caves painted with Buddhist murals, some of which date back to the mid-seventh century AD. We hope that Afghan experts will one day be able to take over and restore the other painted caves at Bamiyan.

When the Taliban bombed the area many of the cave paintings became detached from the cave walls and disintegrated. We're trying to stop the remaining paintings from collapsing, but even more damage has been done by looting and vandalism.

We compiled a database of thousands of fragments, and then conserved the remaining paintings. We've made edgings for the damaged paintings because if water comes into the caves there's a risk that the painting will detach, so we're trying to close these exposed parts.

The three caves are quite different. One cave used to have a statue of a sitting Buddha, but this has been completely destroyed. The walls of the second cave have been painted with a thousand buddhas - they're very small, and painted very high up - but are covered with black soot-like deposits that prevent us from seeing the paintings properly. The third cave we're working on has a vaulted ceiling that is also covered with black deposits.

The caves were painted over a period of 500 years, so there are many influences - some of the murals show signs of ancient Persian traditions, while others are closer to art in central Asia or India. As well as the Buddha paintings, important events in Bamiyan are also depicted - the area used to be a small kingdom, so there are pictures of rulers being crowned, for example.

Working in the caves is difficult. One of them is high up the cliff and hard to reach, so we had to put up some serious scaffolding to get there. The cliffs are fragile and unstable anyway because they're composed of weak sediment.

We hire mine-clearing teams before we go in, but even then you might still have land mines. When it rains you don't know if, or where, mines have landed further down - we just have to follow what the clearance team says. If they say a path has been cleared, we have to trust them. Of course it is very scary but there is nothing we can do.

It is getting harder for foreigners in Afghanistan. Right now the Japanese government, which is funding our work for Unesco, has pulled us out of Afghanistan because Taliban attacks are escalating. It's frustrating because we only need six weeks to finish our project.

Part of the problem is that Bamiyan is a religious monument in an Islamic country, which is dangerous because of the prohibition on religious statues. But we're doing this for the Afghan people. We're not sure if they think about religion when they think of Bamiyan. Maybe they will see commercial potential if the site attracts tourists once the cave paintings are preserved.

It took time for Afghans to take us seriously. At first they didn't want to discuss things with us, as most of us are female and not that old. They were a bit suspicious of us, but when they realised we were serious about our work, they began to accept us. Now, the Afghans who help us on site are very motivated - they all turn up on time, and even insist on looking after the tools when we go for lunch.