Eye to eye with the Dalai Lama

Seattle, WA (USA) -- "The eyes are the windows to the soul," says an old English proverb. I am about to look into a pair of eyes that will change my life. 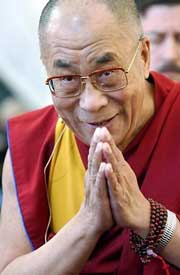 The 14th Dalai Lama walks into the room and sweeps his gaze across the dozen or so people standing around, bowing slightly to each of us, his hands pressed together in blessing. I smile at him, which he returns as he sits for the interview.

I expected a larger man. One always does with someone bigger than life. But here sits this humble leader, short though amply fleshed with round features. He looks healthy like a 71-year-old baby. His head is shaved, his eyebrows dark. He listens with open eyes, a ready smile under the surface, taking in, quietly, all.

We have created a small set to do an interview for a television special on Buddhism in America. I marvel at my luck. Here I am where hundreds of thousands of devotees would clamber to be, a few feet from his Holiness, with nothing to do but observe and listen as I hold the boom pole and microphone.

For 24 minutes I observe, ignored by all, invisible as a bird in the shadows. I see this: He never anticipates an answer. He listens as if for the first time and his answers defy expectation. Attempts to get him to comment on the West's obsession with materiality and its conflict with Buddhist principles fail, though he does say that we in the West try on religions as we do hairdos.

I watch his hands. They are small and slightly chubby, bright pink on the palm side. He gestures with them, often guiding his words to their destination. He pulls his feet up beneath himself and sits cross-legged as if he will stay all day, though we all know in minutes he will be swept away to see some world leader, speak to 15,000 people or go have lunch with Richard Gere.

When asked what America can possible give to Buddhism, he exclaims, "Ah, new question!" And then answers that perhaps it is the influence of women on the religion — that traditional Buddhism is having to learn and adapt, recognizing it might need to change.

When asked about his religion of kindness, he replies, "... all these things: compassion, charity, patience, forgiveness, joy; these do not belong to religion. One does not need religion to understand or practice them. They are simply the expressions of what it is to be human."

The interview is over. I no longer wish to be invisible. I don't know what I want to say, but I want to connect with him. The three of us on the film crew are at the side ready to tear down equipment once the room clears out. As if he heard my wish, the Dalai Lama walks over to give each of us a personal greeting before leaving. Anxiety rips through me like a torn piece of paper. I struggle to figure out something to say.

We don't speak a word. As he moves in front of me, my hands involuntarily reach out to grasp his. As our hands meet he looks up into my eyes and my world stops spinning. His eyes reveal a deep gravity. I see the serious work behind his childlike humor and spontaneity. The man has suffered much and discipline has made him into a spiritual warrior. This is serious work, these eyes tell me, this inner work to discover peace and being.

His attention is riveted. In this moment he is not a busy spiritual leader but simply a human looking gravely into the eyes of another. In this moment I see his greatness. It is this:

Humility is not a discipline; it is not a practice with him. Humility is simply what he is. I see in this moment of eyes meeting that he is incapable of placing himself above or below me. I am stunned by the reality of our equality.

And then he is gone, swept out of the room by his handlers. For the next three hours I am nearly incapable of speaking, stunned as I was with the presence of this understanding.

We are, he told me in his silence, his brown eyes gravely looking into mine, our hands clasped, in absolute attentiveness ... we are ... he said, in those eyes, looking into mine ... the very same soul.

-----------------
Ward Serrill is a Seattle-based filmmaker whose most recent work, "The Heart of the Game," on Roosevelt High School, was released to national acclaim by Miramax Films, www.heartofthegame.org