Sacramento, CA (USA) -- On a blissful day, the sky blue, the grass sweet, the pink geraniums in bloom, Bhante Madawala Seelawimala is escorting a guest around the grounds of his unlikely, little-known Buddhist temple in West Sacramento. 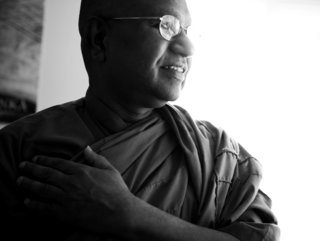 The temple, no gilded showpiece, is housed inside a drab bungalow on a narrow acre of property at the end of a modest, inauspicious street dotted with trailer parks, gravel lots, warehouses, and what appears to be a boneyard for diesel trucks that have lumbered to their final destination.

The only sign of a temple may be the occasional sight of a monk in a maroon robe watering the plants.

Bhante proudly points to a bodhi tree in a plastic pot. "Write this down!" he commands excitedly, noting that the oldest living recorded tree is a bodhi tree in Sri Lanka, planted in 288 B.C. Today, it's still leafy and sturdy, a subject of devotion. Of course, Buddha himself found enlightenment in the velvet shade of a bodhi tree in India.

This bodhi tree, which Bhante propagated from a seed, alas, looks somewhat pathetic. The tips of its broad leaves are crispy; so many limbs have been hacked off, victims of an agnostic winter frost. Still, cries Bhante, the tree, miraculously, endures. In its seasons and struggle, a parable of Buddhism.

Now, Bhante is sitting at a table in an adjacent house, which serves as living quarters for two monks who live at the temple full time. There are travel posters of Sri Lanka on the wall; this persistent murmur of chanting from an audio loop. A temple abbot brings Bhante a pot of tea, a tray of cookies, which include such celestial treats as Oreos and Fig Newtons.

Bhante Madawala Seelawimala is 62 years old. (The term "Bhante" is an honorific). He is a delightful man, warm, wise, bubbly. He has brown eyes and gold-rimmed glasses. Every inch of his face and scalp are shaved, including his brows. He has never given an interview before, does not want to be perceived as seeking attention or celebrity. Though self- effacing by nature, he is a much-beloved Buddhist monk.

"In Buddhism, one of the highest compliments you can give someone is to call them a true human being of no rank," says the Rev. Bob Oshita, head of Sacramento Buddhist Church, referring to Bhante, a longtime friend.

Oshita laughs, recalling the first time he met Bhante. "I asked him why he became a monk and he told me, 'I've always liked the color orange!' "

Bhante was born in 1947 in the village of Madawala, one year before Ceylon, now Sri Lanka, gained independence from Great Britain. He came from a prominent family (his given name was Lionel Bandara Ratnayaka), so it was a shock when he became a monk.

"When I was a boy, I used to sit in a high chair and give (dharma) lectures to my family," he laughs of his precocity, if not his destiny.

At 10, he entered the Ancient Cave Temple, a famous, 2,000-year-old monastery in Ratmulukanda. Before leaving home, his mother extracted a promise from the temple elder that her son be permitted to attend a regular Buddhist school with lay children.

The request, unprecedented, was granted.

Looking back, Bhante chuckles, "I was dressed like this – robe, no hair, running around the school. The Little Monk!"

In 1976, after earning a master's degree in philosophy from Peradeniya University, the Little Monk left for North America, opening temples in Toronto; Vancouver, British Columbia; San Jose. Today, he is a professor at the Graduate Theological Union in Berkeley, where he teaches precepts from the Theravada school, Buddhism's original discourses, now 2,600 years old.

In 1995, he opened a modest Buddhist temple in West Sacramento, which serves around 300 families of Sri Lankan descent, as well as others interested in Theravada thinking.

Bhante, born to be a monk, is a dedicated, enchanting teacher.

"This is important! Write this down!" he instructs, eyes aglow. "Buddhism is about understanding and practicing the basic principles of life. 'Take me seriously. But don't believe me.' That's what Buddha himself said. You must see for yourself."