The World's Next Top Lama

NEW YORK, USA -- To the apparent astonishment and delight of his American retinue, the baby-faced 22-year-old who may one day replace the Dalai Lama as the world symbol of Tibetan Buddhism and icon of Tibetan aspirations said today, on his first trip here, that he hoped he might be able to spend two months a year in the United States, raising the possibility that in decades to come, America could become an important focus for that community. 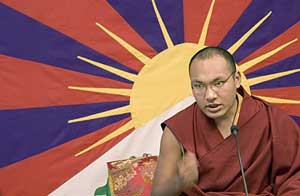 Ogyen Trinley Dorje, the 17th Karmapa, or head of the Kagyu sect of Tibetan Buddhism, sat at his ease in a throne-like overstuffed chair in New York's Waldorf Towers hotel, rimless rectangular glasses perched on his pleasantly round, shaven head, a yellow shirt peeking out from underneath a dark red robe, feet in pebbled brown loafers. Reputedly stern, the Karmapa, who spent half an hour with TIME, was both remarkably well-tempered and focused for a man who had just come off a 14-hour flight — by far his longest since he arrived in India eight years ago as a teenager after a swashubuckling escape from China by foot, horseback and plane. Asked whether he had slept on on his way here, he replied in English, "Sleep, but not well. Lot of..." and he did an expert mime of transatlantic turbulence.

Dorje's two-week American trip, which will include stops in New York City, his sect's center in Seattle and the vast monastery his adherents have nearly completed in Woodstock, N.Y., is a literal "coming out." The Indian government, wary of relations with China, had not until now allowed the young man, whom the Dalai Lama had taken under his wing, to travel internationally. Followers here who have not seen their leader since his predecessor died in 1981 (they believe four years passed before his reincarnation) will bask in his attention and teachings. "The previous Karmapa visited the U.S. several times and his dharma activity here was vast," he said (this time through a translator). "It is my hope to continue that." He added, "My work is not going to be conducted only among other Buddhists, but to help everyone." He also said he wants to "look at things not only from a Buddhist perspective," but from the viewpoint of other faiths as well — a tall order.

And although he confirmed an adviser's caution that Kagyu leaders have no tradition of engaging in politics, he noted, "As far as I'm concerned, the situation in Tibet, particularly the political situation, has reached a level of emergency." He sees his teacher as a major player in dealing with it: "The Dalai Lama is both the spiritual and secular leader of all the Tibetan people, and is recognized as such all over the world, and the Dalai Lama has a tremendous responsibility in his great efforts to bring about a peaceful resolution." But he noted that "in the Tibetan tradition we regard the connection between a lama and his spiritual teacher to be sacred." And "like all Tibetans, I will continue to support him in this as best I can in the future."

Indeed, when the Dalai Lama, currently a relatively healthy 72, dies, the Karmapa could end up his replacement as the face of Tibet. He could never be the next Dalai Lama. "Karmapa," like "Dalai Lama," is its own reincarnate title. Nor could he become the hands-on political leader of a Tibetan government or government-in-exile, a job the Dalai Lama has ceded to a prime minister. But a recent YouTube video shows the Dalai Lama talking to the Karmapa and Ling Rinpoche, the 19-year-old reincarnation of another high monk. The older man tells them, "You two... are still young, and when I die you will be the ones who continue by work." In the video, the Karmapa starts slightly, and his eyes roll back a moment before he regains composure.

The video, which seems authentic, reinforces sentiments the Dalai Lama expressed in public in 2001 and acknowledges the Karmapa's unique portfolio. The Karmapa is traditionally regarded as the third most important person in Tibetan Buddhism after the Dalai Lama and the Panchen Lama, who disappeared years ago and whose replacement, picked by the Chinese, is not recognized by most Tibetans. He is unusual among a new generation of leaders because of his birth and training as a high lama in Tibet. He speaks fluent Chinese, and attracted numerous Chinese adherents before fleeing. The Karmapa's close relationship with the Dalai Lama knits up a historic tension between their two lineages, and helps make him a unifying figure.

Robert Thurman, an expert in Tibetan Buddhism at Columbia University who knows the Dalai Lama well, has had repeated contact with the Karmapa and will soon publish a book titled Why the Dalai Lama Matters, worries that "if [the Karmapa] is pressured by devotees to travel and teach too much at too young an age at the expense of his studies," it could prevent him from "manifesting his full strength." But if he is allowed to mature, says Thurman, "50 years from now my son may have to write a book saying Why the Karmapa matters."

Meanwhile, for the head of a major Tibetan lineage to spend a sixth of every year in the United States would be a tremendous boost for the Buddhist community here. The Karmapa's p.r. representative claims he has attained a near sell-out of 21,000 seats at teachings he will give here (starting with one Saturday at Manhattan's Hammerstein Ballroom) almost solely on the strength of e-mail chains. Many in the audience will be his age. When a reporter noted that the Kagyu lineage is known for its stress on practice and that his own generation is not known for its patience, the Karmapa delivered some advice that his American followers could no doubt appreciate. "If people have no patience," he said, "they have no patience, and I can't insist that they develop it. But I've observed that human life without patience becomes unworkable. My experience has been that I've been forced to develop patience with unchangeable situations." It is a virtue to recommend as well to those hoping for a solution for Tibet's status.