Continuing a love for the written word of the Dhamma

By Kumudini Hettiarachchi, Pix by M.A. Pushpa Kumara, The Sunday Times, May 18, 2008

Surrounded by the sounds of nature in a forest hermitage in Udawattakelle Kandy, a Bhikkhu from Holland carries on the work of the Buddhist Publication Society (BPS), that has gone from strength to strength since its humble beginnings 50 years ago

Colombo, Sri Lanka -- A cloud of pretty butterflies hovers over a mix of brightly-coloured flowers. The absolute stillness is shattered only by the shriek of a rilawa or the sudden start of the orchestra of cicadas, first in one direction and then in another as if an invisible conductor is pointing his baton this way and that. 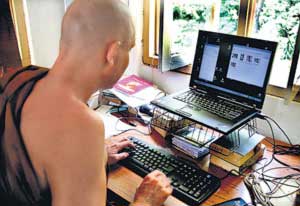 << Bhikkhu Nyanatusita at his ‘workstation’

Here deep inside Udawattakelle, away from the madding crowd of Kandy, ensconced in a small upstair workroom in his spartan abode, 40-year-old Bhikkhu Nyanatusita is engaged in a labour of love.

Although conceding that it takes up precious time, “sometimes as much as 10 hours a day”, that he would usually spend on meditation in this Forest Hermitage, he has willingly shouldered the responsibility of continuing the work of the Buddhist Publication Society (BPS). That of translating from Pali, valuable Buddhist literature into English and also of reprinting some of the great works of Buddhist scholars with a special focus on Theravada Buddhism.

Just past the half century mark, the BPS has blossomed into an authentic source of information on Theravada Buddhism, which was hard to come by in the olden days. New Year’s Day 1958 saw the birth of the BPS, when a prominent lawyer in Kandy, A.S. Karunaratne, and his friend, a retired schoolmaster, Richard Abeysekera, requested German monk Ven. Nyanaponika who was living at the Forest Hermitage to be the Spiritual Director and Editor.

Accepting the challenge, not only did Ven. Nyanaponika, who already had experience in the book trade and publishing back home in Germany as a youth, contribute with his own writings and translations but also published small, easy-to-understand booklets titled ‘Wheel’ and ‘Bodhi Leaves’.

However, limited time in the publishing world was not to be, with the formative years of BPS coinciding with an unexpected upsurge of a worldwide interest in the Dhamma, with the demand for authentic Buddhist literature both in the west and Asia growing to immense proportions.

Based at the Forest Hermitage in the first three years, 1960 saw the further strengthening of BPS publishing when missionary monk Ven. Piyadassi Nayake Thera came on board to edit ‘Damsak’, the Sinhala language counterpart of the ‘Wheel’.

A year later, in 1961, recognizing the invaluable contribution being made by BPS, a benefactor donated land by the picturesque Kandy Lake along Sangharaja Mawatha close to the Dalada Maligawa where now stands an imposing building, designed according to traditional Kandyan architecture, with the BPS office, bookshop, reference library, auditorium and stores.

When due to ill-health, Ven. Nyanaponika wished to retire, it was Ven. Bhikkhu Bodhi, an American monk who had been assisting him, who took over as Editor in 1984, to continue the good work. In 1998, with the passing away of Ven Piyadassi, Buddhist scholar A.G.S. Kariyawasam took over the Sinhala publications and with his death in 2005, N.T.S.A. Senadheera who is currently handling work connected to these books.

After the passing away of Ven. Nyanaponika at the age of 93 at the Forest Hermitage in October 1994, in a farewell tribute published by BPS, Bhikkhu Bodhi wrote thus: “…..moved by a deep sympathy for humanity, he devoted his life as a monk to the task of spreading a knowledge of the Dhamma among those who might be receptive to its message. The supreme expression of this endeavour was the creation of the Buddhist Publication Society……….It was above all his wise guidance, his overflowing compassion and his dedication to the Dhamma that transformed the BPS into a major Buddhist publisher.”

Ven. Bhikkhu Bodhi followed in the tradition already set in motion and when he too found it difficult to continue this onerous task due to ill-health, the responsibility fell on Bhikkhu Nyanatusita, as the BPS had been enjoying a lifespan far longer than what its founders had foreseen. Bhikkhu Nyanatusita took over three years ago.

Contrary to the popular belief among the Sinhalese that most people seek refuge in the Dhamma after a traumatic childhood, he says he had a happy home. “But once you’ve had all the material things, what next? Material things pass away.”

As a youth he joined his father’s import business, then went to see the world. That was when he heard of a meditation retreat in India. The rest, of course, was meant to be. Bhikkhu Nyanatusita had come to Sri Lanka 17 years ago when he was just 23 to learn meditation and had also been ordained as a monk here. After spending time at well-known monasteries in Australia and England, when he returned five years ago, he had been invited by Bhikkhu Bodhi to stay at the Forest Hermitage. “At that time it was not my intention to get involved in BPS,” he says adding that it is most probably kamma which makes life go in a certain direction.

Fifty years on, in 2008, for BPS it is a far cry from its humble beginnings – “a book-lined room lit at night by an oil lamp containing nothing but a typewriter, a writing table and some shelves stacked with office files”. Those days addresses on the envelopes enclosing the books had been written by hand and the books transported to the post office on bicycle and then on to their destinations in Sri Lanka and across the seas.

“Then books were typeset and printed manually on a letter press but now everything is done on computer, it is done digitally,” smiles Bhikkhu Nyanatusita, adding that though modern technology has come into this field too it is still very time-consuming and because so many things can go wrong when a book is prepared for printing it is quite a responsibility. Nothing can be taken for granted.

Fluent both in English and Pali like his predecessors, this Bhikkhu from Holland who also speaks a smattering of Sinhala, is aided in BPS work by authors from far and wide -- Asia, Europe, the Americas and Australia and also a team of proofreaders from across the world. Printing costs are met through membership fees, inheritances and the recycling of book-sale funds.

In the late 1990s BPS had also entered into co-publication agreements with major Buddhist publishers in the west to make works readily available to readers in the Americas and Europe and also co-publish works on Theravada Buddhism first issued by western publishers. “They are Wisdom Publications in Boston and full-time co-publisher in the Americas, Vipassana Research Publications of America (VRPA),” explains Bhikkhu Nyanatusita, adding that BPS books are available in 70 countries. “We have more than 3,000 members, 700 of whom are abroad.”

BPS books have also been translated into many languages including German, French, Spanish, Portuguese, Czech, Hindi and Chinese. The BPS has also published the Dhamma Pada in Tamil.

The Dhamma is also now being disseminated through non-printed format, the internet, audio-CDs, e-Books, audio-books to make it more easily accessible. The BPS has ventured into the virtual, developing a quality website, with the Online Library already containing ‘Wheel’ publications and ‘Bodhi Leaves’.

Many digitalized books can also be read through Google Books, while people can also order and pay for BPS books online, he says. Looking out into the dense undergrowth through his upstair window, laptop balanced on a vegetable rack and powered through solar panels fixed atop the Forest Hermitage where he resides alone, except for visits on and off by foreign monks and people who bring in the dana (alms) he works long hours, distracted only when deer, weli muvo, porcupines and also the slightly pesky wild boar come calling. Only once were there unwelcome visitors, who came on the pretext of asking for water but tied him up, threatened him with a knife and ransacked the Hermitage, fleeing with an old computer and a few bars of soap.

“BPS work is no ordinary work,” says Bhikkhu Nyanatusita, referring to its valuable contribution, discounting the fact that deep within Udawattakelle sometimes due to the cloudy weather the solar panels do not provide enough electricity and the computer batteries go flat. No electricity cables can be drawn from the main supply lines as the nearest houses are far away and that is why the Forest Hermitage is dependent on solar energy.

Even rainwater is harvested here as porcupines and monkeys gnaw through the main water line and the water has to be pumped with an old two tact pump from a tank down the hill. “This is why we are now mostly using rainwater,” says Bhikkhu Nyanatusita. However all those are by the way, with the priority being BPS work.

With the three initials BPS signifying authenticity and authority in Theravada Buddhism literature, the activity of the society is reminiscent of the dharmaduta missions undertaken by King Ashoka.