Happiness inside and out

Jackson Hole, Wyo. (USA) -- Matthieu Ricard is a Buddhist monk, an author and a French translator for the Dalai Lama. He earned a Ph.D.  in molecular biology at the Institut Pasteur in France under the supervision of Nobel Laureate François Jacob, but left his scientific career nearly 40 years ago to devote his life to the practice of Buddhism, prompted by the wish to continue his research “not with bacteria, but with the mind and the mechanism of happiness and suffering.” 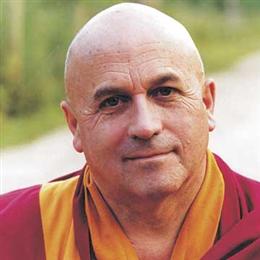 << Photo by MARION STALENS
Matthieu Ricard will teach you how to be happy through mind training.

As the subject of intensive clinical tests in neuroscience at the University of Wisconsin, which resulted in unprecedented discoveries about long-term meditation on the mind, Ricard has been frequently described as the happiest man in the world. So begins our discussion.

Planet Jackson Hole: I’ve read that you are described as the happiest man in the world.

Matthieu Ricard: Early studies that were published in scientific journals stated when long-term meditators - who had done between 10,000 to 40,000 hours of meditation, engaged in compassion meditation - the amplitude of the gamma oscillation in the brain was higher than anything that had ever been recorded in neuroscience. That prompted some media, all of a sudden, to declare me the happiest man in the world.

Because compassion and loving kindness also map in the brain in the area associated with very positive emotions, we could say that loving kindness and compassion are possibly the most positive among all positive emotions. So this is why they equated that with happiness, and since this had been never recorded in neuroscience, they said, “he is the happiest person in the world.”

That is a very big short cut, because first of all how can you evaluate 6 billion people? We have to remain quite clear; I am not the only one. Almost all the experienced meditators had similar results. So it’s more the effect of long-term meditation rather than me as one person.

PJH: While you are here in Jackson, you are going to give a workshop on meditation and a talk on Saturday, June 21, entitled “Training for Inner Happiness.” So how does a person go about training for inner happiness?

MR: Instinctively, we have a very strong tendency to put all our hopes and fears outside ourselves, and we think if we could gather all these conditions or get rid of all those other things we are most likely to be happy. It is the mind that translates the outer circumstances, whether they are good or whether they are bad, into happiness or misery. We spend so much time dealing with the outer condition and so little time dealing with the inner conditions, so we vastly underestimate the power of transformation of mind, and we don’t train our mind.

Our mind can be our best friend or our worst enemy. We spend a lot of time to learn at school, to learn professional skills, to do fitness training and all kinds of stuff, and we do hardly anything to have a more healthy and optimal mind.

So our mental immune system is always not very strong. So that is identifying the conditions that nurture genuine happiness, like compassion, loving kindness, inner strength, inner freedom, and then gradually neutralizing the conditions that destroy our inner happiness like hatred, jealousy, arrogance, obsession, craziness and so forth, which no one enjoys even though we feel powerless not to experience them. But there are ways to get rid of those and there are ways to develop and cultivate loving kindness and other profound states of condition.

Happiness is a way of being. It’s not just a succession of pleasant experiences. That’s pleasure, and it’s quite different. They’re basically not so related. It’s fine to enjoy pleasant things, but it’s not a guarantee for happiness at all. Happiness is a manner of being and manners have to be learned, and nothing comes without training.
It’s surprising that having an optimal mind that gives you the resources to deal with the ups and downs of life would be the only thing in the world that would come without training. You don’t learn the piano by playing 10 seconds every two months. How come the mind would become naturally more attentive or more compassionate without doing anything about it?

PJH: Do you think that people are born with natural inclinations?

MR: There is a genetic predisposition, but it is just a blueprint. It’s not an absolute determination. And a blueprint is like building a house. As you build a house, you can change things.

One of the most active and lively branches in genetics these days is called epigenetics - what regulates the expression of genes. So even if you are predisposed to be very stressed in a way, if somehow you are exposed to a maximum of care and affection when you’re just born or a little after, those genes can be suppressed for life.

So you won’t be as stressed as you could have been if things were just let be as normal.
So genes can be expressed, they can be sort of regulated; and so no matter what the predisposition, there is an enormous margin of what you can do. Yes we start with different baselines, but there is an open-ended possibility for transformation.

PJH: What if the mind is quiet, but there are negative emotions inside?

MR: That’s why we have to get rid of them. That is the secret of authentic happiness. That’s where the mind training comes in. Happiness is a skill, and so is freedom from hatred.