Cologne, Germany -- Ashin Sopaka, a Burmese monk was awarded International freedom prize. The prize was presented by the Society of liberty in Rome, Italy. 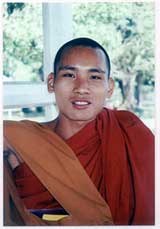 He is the founder of Cologne-Buddhism-Center (KBC) under the name of Santi Dhamma Vihara in Germany. He is currently lecturing Buddhist studies to the German.