Los Angeles, USA -- Victoria and David Beckham have turned to Buddhism. The couple - who live in Los Angeles with their three sons - have reportedly "embraced" the mystical religion and are now chanting every morning in a bid to help them deal with their hectic lifestyles. 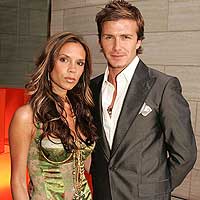 A source said: "David and Victoria have gone completely Californian! David has begun wearing health, prosperity and performance beads around his wrist. He has started yoga and stretching classes after a knee injury, and then a teammate suggested Buddhist chanting to soothe his mind.

"Now he and Victoria do a short five-minute chant when they wake up to start the day off on the right foot, repeating, 'Homage to the blessed one, the worthy one, the rightly self-awakened one.' "

The source added to Britain's Look magazine: "David and Victoria are really getting into the whole holistic, healthy vibe too. Victoria often picks up a soya latte at an organic cafe called Urth Caffe, which is next to The Bodhi Tree bookstore, where she bought hundreds of dollars' worth of self-help books."

The pair have are even said to have employed a feng shui expert to ensure their mansion is appropriately arranged.

The source revealed: "They have had Chinese Feng Shui experts come in to rearrange their home, hope it will improve David's luck on the soccer pitch and their chances of conceiving. They have turned into the ultimate hippy power couple!"