New York, USA -- Gradually, as Surya Das, 48, tells his story, he loosens up. It becomes clear that he's really just a nice, burly Jewish guy from Long Island who happens to be one of the most learned American lamas (Tibetan monks) in the world. 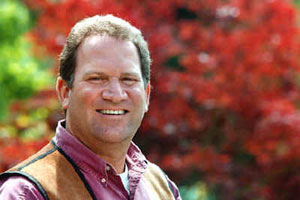 << "'Enlightenment is not some grim chore we have to do. It's being wakeful and mindful. It's a combination of being compassionate and ethical in our actions" - Lama Surya Das

After being ushered into the Times Square offices of Broadway Books, which has just published his fourth book, 'Awakening to the Sacred: Creating a Spiritual Life from Scratch,'' Surya Das - happy being called just 'Surya'' - glances at his watch, and jumps to answer questions, as if by rote, before the interviewer finishes asking them. He refers to his books (including 1997's 'Awakening the Buddha Within'') as 'bestsellers.'' He suggests different angles for the photographer. Instead of the traditional maroon robes, he wears a navy jacket, gray pants, and an Armani tie. He has a head full of curly, light-brown hair.

He doesn't look remotely like a Tibetan monk, and with good reason. 'I don't want to go around in robes because people will think I am different,'' he says. 'I'd be flashier and on the news more, but my message is that anybody can do this.''

Gradually, as Surya Das, 48, tells his story, he loosens up. It becomes clear that he's really just a nice, burly Jewish guy from Long Island who happens to be one of the most learned American lamas (Tibetan monks) in the world.

The lofty title means that he practices Buddhism in his personal life (meditating, chanting, and doing yoga at his Concord, Mass., home), lectures and leads meditation workshops all over the country. He also presides over the Western Buddhist Teachers Network, several hermitages in the Catskills and the Dzogchen Foundation in Cambridge, Mass.

It's an existence that's a far cry from his ordinary Long Island childhood.

Surya Das, then Miller, had a conventional Jewish upbringing. His grandparents emigrated from Russia and owned a sporting-goods store in Brooklyn. His parents were accountants, and he was the eldest of three children (his younger sister is the chief financial officer of the New York Bar Association; his brother teaches biomedical engineering at Johns Hopkins University). He was bar mitzvahed at the Gates of Zion Synagogue, where his mother, Joyce, is still vice president (his father passed away three years ago). Joyce calls her oldest son 'the deli lama.''

It wasn't until 1968, during his freshman year of college at SUNY-Buffalo, that he got his first taste of Buddhism. On a whim, he traveled to Rochester for a weekend-long meditation retreat hosted by Philip Kapleau, the author of 'The Three Pillars of Zen'' and 'had a mini-breakthrough, or something,'' he says. 'But I was a college freshman, and I went back to dorm life and going crazy. It was the '60s, so we were into being out of our minds, and into music and the peace movement.''

He was affected more profoundly two years later, on May 4, 1970, when his best friend's girlfriend, Alison Krause, was shot and killed at Kent State while protesting the secret bombings in Cambodia: 'I realized that fighting for peace and demonstrating for peace were not the way. I had to become peace and embody peace.''

After graduating from Buffalo with honors in 1971, Miller hit the road, traveling through Europe, the Middle East and then India, Tibet and Nepal. He stayed in Asia for the next 20 years.

'I traveled around, spent a year teaching Zen Buddhism at a college in Japan, and lived in a monastery,'' he says. He was given the name Surya Das - which means 'servant of the sun.'' He spent 15 years becoming a monk - 'studying rituals, philosophy, ethics and morals, and yoga, and spending three and a half years in solitary retreat'' - and acting as a bodyguard, attendant, translator and sometime adviser to the Dalai Lama, whom he met in 1972. (He was also celibate for eight years, but has a girlfriend - 'My little Kathy. She has cats and I have dogs'' - now. In two of the four sects of Tibetan Buddhism, monks are allowed to marry.)

While abroad, Surya Das flew back to New York occasionally to attend weddings, funerals and baby showers, or to celebrate Thanksgiving. 'My parents went crazy when I left,'' he says, laughing. 'They wanted me to be a doctor or lawyer.''

In 1990, Surya Das returned to the United States with full authorization to ordain monks and teach Buddhism in America and Europe. He quickly began writing.

'Enlightenment is not some grim chore we have to do. It is much more simple,'' he says. 'It's being wakeful and mindful. It's a combination of being compassionate and ethical in our actions.''

Surprisingly, Surya Das believes that New York, the stress center of the universe, lends itself perfectly to his ideas. 'The energy is so high here,'' he explains. 'It's like good surfing - either you drown or you have a great ride. If you can be grounded and not get carried away with competitiveness, workaholicism, unhealthy eating, caffeine or worse drugs, then you can ride that wave.''

(When asked how he reconciles his Buddhist teachings with his ever-increasing material income from book sales and lectures, he says, 'I gave up everything when I went to Tibet. I know what it is to do without. Money is not evil, being too attached to money is the problem.'')

On a more practical note, Surya Das suggests showing compassion on a small scale. 'Bring loving kindness to every contact you make - with the dry-cleaning person, the bus driver, a dog or a homeless person. Remember that you can feel like an ant here because the city is so big, but there is something inside you that is bigger.''

'Buddhism isn't about becoming someone else or putting on a costume. Anybody can do it,'' he reiterates. 'I went to the same summer camps as everyone else. I went to college and experimented. I follow sports, I'm a guy.''

With that, the lama in the tailored Western clothes stands, bows with his hands clasped and gives his interviewer a big bear hug.