Aspen, CO (USA) -- So what do you do with your life after you've been the city manager of Morrison, Snowmass and Aspen? 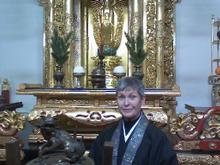 << Photo by Jean Torkelson © The Rocky
Carol O'Dowd is one of few Buddhist ministers who are female.

Here's what Carol O'Dowd did: She became a Buddhist minister.

"Yeah, I was on a fame and power trip," chuckles the 56-year-old wife and mother. "Now I aspire to wake up."

On Sunday, this granddaughter of a Southern Baptist preacher led the services at the Tri-State/ Denver Buddhist Temple, 1947 Lawrence St. The temple, nearly 100 years old, is led by the Rev. Kanya Okamoto, who was away. It belongs to a strand of Japanese Buddhism that's 750 years old.

Sixteen years ago, the Rev. O'Dowd veered from power trip to path of enlightenment when she agreed to let her son Scott, then about 8, choose a church to join. On one outing her clever son led her to the temple and told her, " 'You said pick a church; you didn't say what religion.' So I was stuck."

In 2001 she decided to take the path of minister when, in short order, her parents, a favorite aunt and her cat all passed away. Those losses "made me wake up to life, more than fame and power."

How long does one study to be a minister?She laughed. Studying never stops. Her Buddhist name, Gansho, means constantly learning, but she thinks it really means, "bumbling along on the path."

How does a Western teacher fare in a congregation that is 60 percent Asian? Noreen Okubo, a chemical engineer of Japanese ancestry, said O'Dowd does well because she teaches Buddhism in English, now the preferred language. The real barrier, worldwide, is being a woman.

"BCA stands for Buddhist Churches of America," Okubo said. "But Carol and I say it stands for 'Boy's Club of America.' The idea has been, 'You can't be enlightened if you're a mother; no way can you be a priest if you're a woman.' "

It's eased up now, though O'Dowd remains one of only a handful of women clergy in the San Francisco-based BCA, a network of 60 member churches in the U.S.

Sunday, she led a special Buddhist Women's Association memorial service honoring the women behind the scenes.

One was Ruth Suekama, who died last year, one of those efficient, indispensable "kitchen ladies" who ran the church kitchen for years, leading a life of quiet service and making sure the hearty Buddhist brunches never ran out.

In Buddhism, O'Dowd said, gratitude and service to others are key. In a gasping economy with mounting layoffs, perhaps her story teaches new career seekers that you don't need to abandon your core passions - just morph them into another form.

She recalled meeting recently with some former cronies in city management and telling them how in her new position, "my passion is the community - helping everyone tap into the spirit of the community."

"Hey," one of her old buddies said, "you were saying that when you were city manager!' "