SIDHBARI, India — Give the magnetic personality and hunky good looks of a rock star to a Tibetan Buddhist monk, and the result might be Gyalwang Karmapa, the third-highest lama in the Tibetan religious firmament. 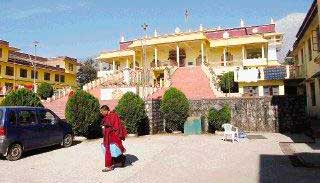 << A monk carries buckets in front of the main pavilion at the Gyuto Tantric College in Sidbhari, India. The building is the exile home to the 17th Karmapa, the third highest Tibetan spiritual figure after the Dalai Lama and the Panchen Lama.

The Karmapa, as he is known, is getting more than his share of attention these days.

He’s being talked about as a possible transition figure for when the Dalai Lama, who’s the spiritual leader of Tibetan Buddhists, dies. The Dalai Lama, 73, was hospitalized last month to have gallstones removed.

At 23, the Karmapa has some unique characteristics that make him appealing to a broad cross-section of Tibetan Buddhists, and even to China, which now claims the right to approve or veto all reincarnations born to become “living Buddhas” — or senior lamas delivered to help alleviate human suffering. Reincarnation, or rebirth, is a basic tenet of Tibetan Buddhism.

The Karmapa is the first Tibetan Buddhist reincarnation to be recognized by both the Dalai Lama and Communist Party authorities of China. He made headlines in January 2000, at age 14, with his flight from Chinese-ruled Tibet into exile, traveling by foot and horseback, then by jeep and helicopter to India. Allegations of espionage, intrigue involving a forgotten amulet and squabbling within a monastery marked his early years in India.

Exuding self-assuredness, the solidly built, 6-foot-tall Karmapa received several foreign journalists in a rare interview over the weekend at the university that’s his temporary home near the mountain headquarters of the Dalai Lama. The Karmapa talked of his love of music, his future role for Tibetan Buddhists and the lack of human rights in China.

He criticized the Chinese government, which he said wanted “to create this ethnic conflict” that exploded in deadly rioting in Tibet in March. However, he spoke tenderly of the Chinese.

“Since I am born as a Tibetan, I really care about the Tibetan people and Tibetan community. At the same time, I also love the Chinese,” he said.

He sat cross-legged on a sofa in a large meeting room with Tibetan thangkas, or religious paintings on the walls. Outside, crimson monks’ robes flapped from clotheslines in the warm sunshine, and crows cawed loudly from tree branches.

Some Tibetan exiles say the Karmapa has a magnetic hold on Tibetans.

“Some people like to say he’s going to take over the helm of the Tibetan movement when the Dalai Lama passes on,” echoed Phil Void, a musician and one-time Ph.D. candidate in Buddhism at Columbia University who now lives in Dharamsala.

The Dalai Lama, asked about the Karmapa at a news conference Sunday, described him as “young, energetic and of course (with) a lot of experience in Tibet” but declined to go further in elaborating on his future role.

The Karmapa is the head of the Karma Kagyu, one of four schools in Tibetan Buddhism, and is believed to have about a million followers in Tibet and several hundred thousand in Europe and the U.S.

He’s been called the 800-year-old lama. That’s because followers believe he’s the 17th in a line of consecutive lamas reincarnated, or born, with the same spirit or consciousness. According to this belief, the current Karmapa embodies the collective wisdom and learning of all of his predecessors.

Using omens and a prediction note from the 16th Karmapa that turned up in an amulet, senior lamas identified a young boy, Ogyen Trinley Dorje, as the reincarnated Karmapa, and sent him for religious training at the Tsurphu Monastery near Lhasa, Tibet’s capital. China gloried in its trophy lama, viewing him as a calming influence on restive Tibetans.

“The Chinese intentions were to use him as a puppet, as a propaganda tool,” Void said.

After all, he was the only undisputed great Tibetan lama remaining within China.

But the boy lama grew unhappy. He wasn’t allowed access to some of his teachers at Tsurphu Monastery, a vital lapse since many teachings are oral. So he doffed his robes and put on a baseball cap for a daring escape.

The flight into exile proved humiliating to China, which initially claimed that the Karmapa had gone to India to retrieve some musical instruments and key black hats worn by his Buddhist sect.

Once in India, the Karmapa found his movements constrained by Indian security agents who seemed to consider him a threat. He’s never been allowed to visit the Rumtek monastery in Sikkim that’s the seat of his sect in India.

“Indian intelligence perpetrated the baseless allegation that he was a spy sent by China. No one would believe he could escape right under their noses,” said Kate Saunders, a spokeswoman for the International Campaign for Tibet, an advocacy group with offices in London and Washington.

Moreover, his sect has been riven by dispute. While the Dalai Lama has recognized him as the correct reincarnation, a sect leader tapped a rival as the real Karmapa, setting up his shop in New Delhi. Control of the Rumtek monastery is now at issue in lawsuits over the matter.

The Karmapa said he’d like to play a bigger role in easing tensions between Tibetans and Han Chinese but doesn’t quite know how to do so.

“If I get a chance, I want to do this. I’m not sure I’ll get this chance. It’s difficult, as you see, to connect with the outside world,” he said, signaling to the security presence.

He talked bluntly about the reasons Tibetans launched demonstrations and protests that roiled ethnic Tibetan areas of China in March.

“Because there are no human rights under Chinese, some of them stood up. That’s the reason for the spring uprising,” he said. He said since China “is more advanced and more powerful, they should have more consideration of Tibet.”

Beijing has said nothing overtly critical of the Karmapa, making clear that it wants its great lama to return and counterbalance the criticism that the Dalai Lama regularly heaps on China.

But there’s no sign that will happen. The Karmapa has been given a significantly looser leash by Indian security, winning a chance to visit with U.S. followers last summer in New York, Boulder, Colo., and Seattle, a trip he called “wonderful,” adding, “I found some freedom.”

His residence in exile carries some sadness, too, as his parents remain in Tibet. China doesn’t permit them to travel to India. “I want to see my parents,” he said. “Their life is very simple, in a remote place.”

So he devotes himself to intense religious study, preparing himself for the future, although he does enjoy a favorite pastime.

“I like music. I can’t dance because of these robes,” he said. “I just listen.”

On the Net:
The 17th Karmapa’s homepage: www.kagyuoffice.org/karmapa.html
TOP