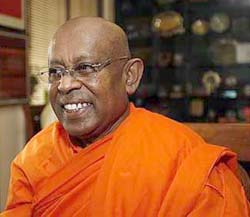 However, all the nasty incidents did not deter Piyananda from settling down in the United States where he has been residing for 33 years.

“I wanted to go to America for new experiences and to explore a way of life that’s different from conservative Asia,” said Piyananda, 66, during a short stopover in Malaysia en route to Sri Lanka. Opportunity came knocking when he was offered a scholarship to study Christianity at Northwestern University in Chicago.

Piyananda is the founder-president and abbot of Dharma Vijaya Buddhist Vihara in Los Angeles, California. It is one of the oldest Theravada Buddhist temples in North America. He is also president of the Sangha Council of Southern California, Chief High Priest in the United States, and advisor to the President of Sri Lanka on international religious affairs.

Ordained at the age of 12, he took the name of his village, Walpola, and the Buddhist name, Piyananda, which means “pleasant joy”.

Piyananda has a BA (Hons) in Buddhist studies from Kaleniya University, Sri Lanka, and a Masters in Pali from Calcutta University. India.

After his post-graduate studies in India, he returned to Sri Lanka to serve as a monk but felt the urge to go to the United States which he saw as a “great land of freedom, equality and opportunity”.

Eventually, he realised his dream to go to the United States to further his studies and graduated from Northwestern University in Chicago in 1980, and the University of California, Los Angeles, in 1985.

Piyananda recalled his early days in the United States which were fraught with challenges. There was the shocking incident at a bus stop in which a gentleman in a Mercedes Benz pulled up next to a curb, ran up to him and spat in his face. He was told to “go away cos he did not belong in the country”.

The following year, in1977, five youths mistook him for a Hare Krishna devotee and accused him of being involved in the kidnapping of a girl. Piyananda showed them his Northwestern ID card, explained his monk’s robe and convinced the group that he was not a Hare Krishna devotee as he did not have a ponytail but a clean-shaven head.

Perhaps the most amusing tale was when someone thought he was suicidal. A year after his arrival in Los Angeles, a Thai family had invited him to their apartment for dana (requisite offering). While waiting in the lobby for the driver to park the car, he decided to adjust his robe and wear it differently. Within minutes, the siren blared. He found policemen and paramedics rushing towards him.

Apparently a woman had called the emergency line and reported that “an Indian guru was trying to suffocate himself with his long robe!”

En route from Los Angeles to Berkeley, Piyananda was stopped from entering the men’s toilet in a rest area. Wearing a knit cap and in traditional monk’s robe, he was mistaken for an Indian woman in a saree!

In another incident, while waiting to catch a flight to Minneapolis, Piyananda went up to a police officer and asked for directions to the departure gate after other people ignored him. He was threatened with arrest and had to produce his boarding pass.

There was another harrowing incident he encountered while strolling along a pier in Santa Monica. Piyananda encountered a group of punks who taunted him for being “an alien” and “a shaved pumpkin”.

Piyananda teased them and joked that he was the “new punk” with a clean-shaven head, while they only shaved the sides of their heads.

Extending his hand in friendship, he told them that his name Bhante meant “spiritual friend”, piya for “pleasant” and ananda for “happy one”. Soon they were happily chatting away and he invited them to his temple. They have since become his students and one, a Buddhist minister.

Piyananda also had brushes with women that probably left him red-faced. In August 1979, an American woman in her 30s sought his advice at the Buddhist Meditation Centre in Los Angeles, his home base then. She was misguided by her guru’s advice to have sex more often to lose weight. She put up two posters in the centre, offering sexual favours; this angered the abbot who chased her out. Piyananda listened to her story, helped her understand her foolishness and persuaded the abbot to allow her to stay on.

While attending Vesak celebrations in Berkeley, a desperate woman outside the women’s toilet asked him to go into the cubicle to help her remove her pants!

Piyananda later saw her predicament: both her arms were in plaster cast and she was unable to remove her pants to use the bathroom. He ran up the stairs to get a woman to help her out.

On another occasion, a woman at a meditation centre where he taught gave him a generous donation of US$300. He thanked her and asked what she did for a living. She told him she was a hooker. Not understanding what “hooker” meant, he praised her for a “wonderful career” and added that she “must be very happy”.

When he realised his blunder, he went in search of the woman and convinced her to turn over a new leaf. Eventually she became a case worker for the protection of abused children.
TOP