Bangkok, Thailand -- The Venerable Dr. Pannavati, the abbot at Embracing Simplicity Hermitage in Hendersonville, is one of 10 women in the world who will receive an Outstanding Women in Buddhism award in March. 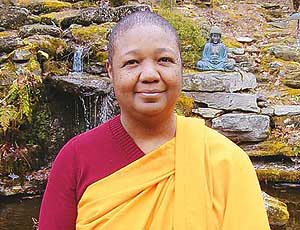 << Venerable Dr. Pannavati, abbot at Hendersonville’s Embracing Simplicity Hermitage, has been selected to receive an Outstanding Women in Buddhism award for 2009. She travels to Thailand for the March 6 ceremony, where she will give a keynote speech.

Pannavati, who lives and serves in a quiet corner of Henderson County, left Feb. 25 to travel to Bangkok, Thailand, to receive one of the awards on March 6. All 10 women were nominated by their peers for achievement in social work, community development and peace activism.

"For myself this award means nothing," says the humble Pannavati. "But when I think about the women all over the world who labor in obscurity and are not recognized - I accept it for them."

Pannavati will be one of two women giving a keynote speech at the Outstanding Women in Buddhism conference.

Originally from Washington, D.C., Pannavati, 59, is the first African American woman ordained in the Theravada tradition of Buddhism. And she is the only African American female abbot of a monastery.

During her two-week trip to Asia, Pannavati will visit Buddhist monasteries in Thailand, Burma and Cambodia.

Pannavati, who has been a Buddhist nun for 10 years, isn't sure how she was nominated for the award. A speech she gave at a conference in Mongolia last year might have inspired a letter of recommendation for the award, she speculates.

"I was not expecting this," Pannavati says. "I think what moved the women in that audience was seeing what could be accomplished - what was allowable."

After an international search of possible locations - from Panama to Costa Rica - they decided to settle in Western North Carolina. The Hermitage is nestled on six acres just off Finley Cove Road in Henderson County. It provides residential training for monastics and lay members of the Theravada Buddhist Order and serves as a spiritual refuge. Someone doesn't have to be Buddhist to visit Embracing Simplicity Hermitage or use its facilities.

And, in keeping with American culture, the Hermitage's monks are both approachable and touchable.

The Hermitage has a Sangha, or community, of about 60 members. Last year the Sangha constructed an on-site retreat and meditation hall up the hill from the main residence building. Construction of the new hall was completed in just six weeks.

Now that she's established Hendersonville as home, Pannavati feels ready to help meet the needs of the community.

"There's a lot of talk about peace, but as long as there's violence, there can be no peace," she says.

Several teenagers - who she gently describes as 'unaccompanied youth' with no stable place to call home - now live at Embracing Simplicity in what was formerly the retreat space, downstairs from the residence hall. Helping the youth is part of Pannavati's goal of focusing on service where it's needed.

To address some of the community's needs, Embracing Simplicity Hermitage has recently formed two nonprofits organizations: My Place and Youth Build of Western North Carolina. The organizations' goals are centered on housing, assisting teenage mothers and homeless youth, and developing skills for at-risk youth in Henderson County.

My Place, only a month old, encompasses an off-site house for teen mothers. The program aims to provide a safe haven for youth, allowing them to work toward getting back on their feet and earning a GED or college-level degree.

The program has received $600,000 of in-kind service commitments and has formed partnerships with organizations such as Mountain BizWorks, United Religions Initiative, Henderson County Public Schools and Blue Ridge Community College.

Youth Build of WNC, the other nonprofit, plans to develop 16 townhouses to be built by about 30 at-risk youth, ages 16 to 24. The program focuses on skill development and responsible independence. A grant application, supported by the Housing Assistance Corporation, is pending for Youth Build of WNC.

Partners who work with Pannavati give her high praise.

"She is one of the most impressive, powerful, loving women I have had the pleasure of working with," says Mary Page Sims, convenor of the United Religions Initiative in Hendersonville. "Her care and concern for the world is palpable."

With a cheerful, freckled face, Pannavati has a relaxed, friendly air. She is quick to smile and hesitant to have too much attention directed toward her.

"Buddhism in the West has been an elite spiritual culture," she says.

"Racism is one of the silent topics - there aren't too many people of color carrying over to Buddhism from regular life. Part of my work is to erode these barriers."

Pannavati is ordained in the deeply traditional teaching of Theravada as well as in the Mahayana tradition. Her 10 years of experience as a Christian pastor before converting to Buddhist practice expands her perspective. She has also served as a Taoist monk, an initiated yogi and has a doctorate in religion.

Pannavati's insight comes not just from study, but deep personal commitment to practice and understanding of the central truths in the various spiritual traditions.

"We should all blend like milk and water," she says. "My example is to destroy these sectarian notions - to keep to the truth to where it liberates, not imprisons."

Pannavati serves on numerous local committees and advisory and planning boards, including the United Religions Initiative, Interfaith Ministerial Association, the Academy for Peace and the Justice Initiative, a grassroots organization highlighting immigration issues.

To date, nine people who now serve as far afield as France and Mexico have been ordained as monks or nuns at Embracing Simplicity.

The Hermitage also offers personal retreat opportunities for up to 30 days. A person on a retreat at Embracing Simplicity could participate in the daily and Sunday schedule of spiritual activities at the Hermitage, follow her or his own meditation and spiritual practice or opt for a completely silent retreat.

Pannavati believes that the Outstanding Women in Buddhism awards are an encouragement to women of the West as much as the East, where patriarchal obstacles in the Buddhist community are still prevalent.

"I knew she deserved the award when I saw her open the letter saying she would be receiving it," says Pannadipa. "She cried and said, 'I don't deserve this - there are so many others who do.'"

Pannavati's response deepened his admiration of her.

"I respect that about her," Pannadipa says. "She does a tremendous amount of work in the community - I feel joyful about this individual's walk and that she's being recognized."

The other awards have gone to women who are queens as well as to women who are virtually nameless. For Pannavati, acknowledging the accomplishments of the women of Buddhism is a way of getting beyond limitations, whatever they may be. She sees racism as one of these obstacles.

Past recipients of the Outstanding Women in Buddhism Award include Buddhist nun Ani Pema Chodron, who received the award last year. A prolific writer, Chodron has gained international attention for her ability to link Buddhist practice with everyday life through her books and teaching.

"This is an honor," Pannavati says. She is humbled to be recognized with the other recipients of the award. "These women are the matriarchs of our spiritual practice."

Embracing Simplicity Hermitage is located at 41 Wisdom Lane in Hendersonville. For information about events or retreats at the hermitage, visit www.embracingsimplicityhermitage.org or call (828) 338-2665.