Paris, France -- On March 10, Tibetans are celebrating the aborted rebellion against the Chinese invasion that followed the Dalai Lama’s forced exile to India 50 years ago. 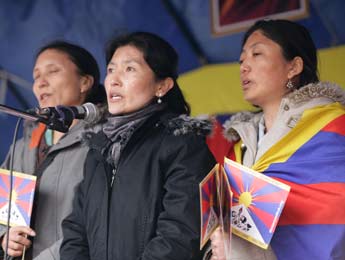 Since then, Tibetans have been seeking autonomy for their country and the return of their leader, two demands rejected by Beijing, which, for the occasion, has beefed up Chinese forces in the region.

Ngawang Sangdrol, a Buddhist nun, was imprisoned in 1990 for shouting “Hail Tibet” and “Long live the Dalai Lama, His Holiness” during a peaceful protest near Lhasa, Tibet’s capital. She was 13 at the time.

Sangdrol was part of a group of 14 nuns called the “Singing Nuns” or “Drapchi 14”, who while in jail composed pro-independence songs.

A pro-Tibetan network helped them to get their tape out of their jail and spread their songs as far as Europe.

One of the nuns, Ngawang Lochoe, died in 2001 at the age of 26 as a result of being tortured. The other 13 nuns have been released, many for medical reasons.

Three of the nuns were reunited on Monday in Brussels, where they asked European states to put pressure on China to liberate political prisoners.

The nuns met in Drapchi, Lhasa's largest jail, infamous for abusive treatment of prisoners. In summer 1993, locked behind the jail’s doors, the 14 nuns decided to record a series of songs.

Night after night, they whispered their hopes into an old tape recorder. “Land of snow, when Tibetans are united, sun will emerge from the clouds” was one lyric.

When their secret was discovered, the authorities accused them of counter-revolutionary propaganda and extended their sentences.

Sangdrol, the youngest of the Drapchi nuns, was 15 when she was caught with the tape. Her three-year jail sentence was extended to six.

Sangdrol said what she did was not an act of bravery. Speaking out about Tibetans’ suffering, she said, is her “responsibility”.

“I have seen with my own eyes the tortures inflicted on Tibetans. I have witnessed the destruction of our culture. It is my responsibility to say what is going on,” Sangdrol explained.

The nuns have paid a high price for their involvement. Phuntsog Nyindron, 38, still suffers from the after effects of 14 years of imprisonment and brutal torture.

“When I arrived in jail,” she said, “the guards attached my hands behind my back and pulled on my arms until my shoulders dislocated. They burnt my hands and face with cigarettes. Every day they struck us in the face. But one day they attached electric wires to the tips of my fingers and shocked me while beating me with iron bars. They left me in my cell, unconscious, with neither water nor food.”

After their release, six of the nuns left Tibet, making their escape from the country on foot, often walking by night, on the snowy roads that the Dalai Lama used five decades ago.

“When I was freed [from Drapchi prison], I did not think of leaving Tibet. But things only got worse. My house was under constant surveillance. I had no freedom of speech or movement,” said Namdrol Lhamo, 43, who now lives in Belgium after 12 years spent in Drapchi.

“We experienced terrible conditions in the prison,” said another nun, Gyaltsen Drolkar, who has lived in Brussels since her liberation in 2003. “So it is essential that the last detainees are freed,” she said.