Bylakuppe, India -- The 11th throneholder of the Palyul Lineage of the Nyingma School of Tibetan Buddhism, His Holiness Penor Rinpoche, entered his final meditation at 8:20 pm on Friday, March 27, 2009, at the Palyul Namdröling Monastery in Bylakuppe, South India. 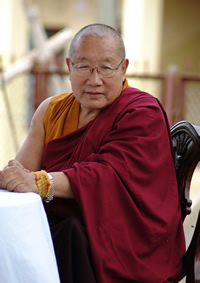 Earlier, at noon, he received offerings from many of the highest Nyingma Lamas, Tulkus and dignitaries who had assembled to pay homage to him. At 3:30 he left Columbia Asia Hospital with the Indian government providing a police escort.

He reached Palyul Namdröling at 6:40 pm and remained on his bed in his residence. Tulkus, Khenpos and lamas did aspiration prayers together with His Holiness until 8:20 pm.

Then he looked around, closed his eyes and went into meditation.

Prayers continued for 5 minutes and then everyone remained in silence for the next two hours. His meditation continues today, and is expected to continue for a couple of days.

When he releases his body from meditation, there will be an official acknowledgement of his final passing, allowing everyone to pay their respects according to tradition.

Kyabjé Drubwang Pema Norbu Rinpoche was born in 1932 in the Powo region of Kham, Eastern Tibet. After leaving Tibet, he settled in South India, where he built, from his own hands and with the help of a few monks, the Palyul Namdröling

Monastery. It has grown into one of the largest temples in the world, housing over 6000 monks and nuns in the complex, which also includes a hospital and hospice.

His Holiness has also built temples around the world - in Taiwan, Hong Kong, Singapore, Malaysia, Philippines, United Kingdom, Greece and the United States - among others. He has frequently traveled to teach and give empowerment at all of them. Worldwide, His Holiness is revered for his compassion, pure upholding of the Vinaya and ceaseless dedication to the welfare of all beings. He has brought and nourished the Buddha-Dharma everywhere he has been.

At this time, Jetsunma has instructed those who wish, it would be beneficial to make abundant offerings and tsog offerings.

He will live forever in our hearts.