A Chinese pop singer monk bats off criticism to bring Buddhism to a new audience with his modern musical take on traditional teachings.

Beijing, China -- Chinese monk Shi Daoxin's life is not just about temples and sitting in meditation. 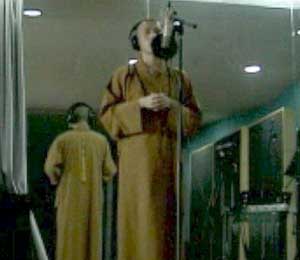 The young modern monk has gone multi-media to take his preaching to another level.

Shi has released one album and two singles since he first came to Beijing two years ago.

His songs, which feature lyrics taken from Buddhist teachings, are played on Chinese national TV and radio, and have received thousands of hits on the Internet.

"I think how Buddhism evolves in the future is very important. Will it remain the same as in old times, with monks preaching at temples, or will it keep up with the modern world by using multimedia or the Internet to reach out to more people? I am the first person to do it",  Shi Daoxin said.

Shi is planning to release his second album this year, featuring easy to understand Buddhist songs. The money he makes from it will be given to charity, he added.

Wu De, a Buddhist follower, said she was overwhelmed when she met Shidaoxin in person and got his autographed CD.

"Everyone in my family practices Buddhism. I heard the monk sings very well, so I bought his album to play for them. We will listen carefully and learn from him. Amitabha", she said.

Not everyone likes the idea of a monk who uses an IPOD, wears sunglasses and replies to e-mails from fans - Critics have dismissed him as a disgrace to Buddhism, accusing him of simply chasing fame.