In the stillness, space for a rebellious spirit

Leaving the dogma behind Los Angeles, CA (USA) -- Except for his bald head, there isn't much monkish about Noah Levine. His body is covered with tattoos, his speech is spiked with profanities, and his style (T-shirts devoted to his favorite bands, lots of black) is a throwback to his days as a hard-core punk rocker. 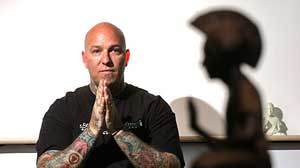 << Ringo H.W. Chiu, Los Angeles Times Noah Levine, 37, is the founder of the Against the Stream Buddhist Meditation Society, which has centers in East Hollywood and Santa Monica and more than 20 affiliated groups nationwide.

So it looked a bit unusual to a newcomer when, on a recent evening, Levine, 37, sat cross-legged at a Buddhist center in East Hollywood to lead several dozen people in a guided meditation.

"Now bring your awareness to your breath," began the Buddha in the Bad Brains T-shirt, who happens to be one of the most influential Buddhist teachers in America.

Levine is the founder of the Against the Stream Buddhist Meditation Society, which has centers in East Hollywood and Santa Monica and more than 20 affiliated groups nationwide. He and his students practice a unique incarnation of Buddhism infused with punk rock's anti-establishment ethos. They call themselves Dharma Punx.

Dharma Punx don't wear robes and they don't bow to statues of the Buddha. Anyone can form a group -- as long as he checks with Levine first -- and there isn't the emphasis on hierarchy found in many forms of Buddhism (there are no Zen masters or Tibetan lamas). The idea, Levine said, is to make Buddhist teachings accessible to punks -- and to reconnect Buddhism with what he sees as its radical roots.

"I don't feel like this is bringing a punk rock corruption into Buddhism," Levine said. "I think that that anti-establishment ethic is a part of Buddha's teachings."

Both punk rock and Buddhism, according to Levine, began as a rebellion against the status quo. "The first noble truth of Buddhism is that there is suffering in life, that there is an unsatisfactory quality to living in a world where everything is constantly changing, and to living in a world where there is so much greed and hatred and delusion," he said. "Punk rock's foundation is dissatisfaction, acknowledging greed, hatred and delusion and rebelling against sexism, racism, political corruption and war."

By bringing punk and Buddhism together, Levine has reached a mostly untapped demographic.

"I've been to other Buddhist centers where I felt out of place, but I've found a home here," said Gary Sanders, 37, who drives from Castaic to East Hollywood to attend Levine's meditation sessions. "Noah's taken an approach that makes it palatable to our scene."

The movement gets its name from Levine's 2003 book "Dharma Punx," which chronicles his involvement in the Santa Cruz punk rock scene, his recovery from addiction to crack, heroin and alcohol, and his turn to Buddhism.

Levine, whose father is noted Buddhist writer Stephen Levine, first tried meditating in 1988 while locked up at a juvenile hall in Santa Cruz (for trying to steal a car radio to score some drugs). At the time, he was a homeless 17-year-old dropout, an angry kid who had spent his whole life rebelling. At a young age he had found an outlet for his anger in the punk scene -- in the fury of the music and the anarchy of the mosh pit -- but when he slid into addiction, he traded his mohawk, Doc Martens and leather jacket for a crack pipe.

Sitting in a padded detox cell, Levine at first felt suicidal. When he started meditating, he found a kind of peace. "My early life's external rebellion had only led to more suffering," he wrote.

Continuing to meditate, he got sober with the help of a 12-step program. He attended his first meditation retreat in 1991 -- with Jack Kornfield, an influential Buddhist teacher who trained as a monk in Thailand and Burma.

Levine liked Kornfield's message -- he went on to study with him -- but he said he felt a little out of place.

"I was the only 20-year-old there and certainly the only punk rocker," he writes. "Looking around, I didn't see anyone even close to my age. This was my father's scene, not mine."

After 10 years of studying Buddhism, Levine was certified to teach by Kornfield. But he wanted to create a new scene -- for people like himself, the kind who liked to rock out to bands like Suicidal Tendencies and slam-dance in mosh pits. So he began leading meditation groups in Santa Cruz and San Francisco and in 2003 launched a Dharma Punx group on New York City's Lower East Side. He moved to Los Angeles three and a half years ago and founded Against the Stream last year.

Though he draws inspiration from many strains of Buddhism (including Thai, Sri Lankan and Burmese), he said, he has tried to tear down the hierarchical difference between teacher and student that is common in those forms.

"I tend to present the teachings as a peer, as, 'We are all in this together seeking happiness,' " he said. "We are all the students. Can we take the wisdom and the compassion of the Buddha's teachings and roots and leave behind some of the other things that I see as corruptions -- the dogma, the power, the patriarchy and superstition?"

Levine lives in Highland Park with his wife, Amy, and his infant daughter, Hazel. He earns a living as a psychologist but travels frequently to lead meditation workshops and retreats around the world. He founded and sits on the board of the Mind Body Awareness Project, an Oakland-based nonprofit that teaches meditation to at-risk youths in juvenile halls, clinics, high schools and group homes.

His twice-weekly meditation sessions at Against the Stream are among the best-attended in Los Angeles, and they attract a diverse crowd not limited to punk rockers.

Levine has found an especially receptive audience in recovering addicts. He speaks about his own relationship with drugs and alcohol, saying meditation helped him learn the impulse control that is crucial to overcoming addiction.

Members say they come because they like his simple style.

"He doesn't speak in riddles or parables. He's straightforward," said Duane Dinham, 46, who has been coming to the meditation center for the last five months -- in part, he says, because he likes how Levine doesn't seem to take himself too seriously.

"I came here because it's non-dogmatic," Dinham said. "He has a certain irreverence that I like."

Before starting his meditation session on a recent evening, Levine walked into the large, airy meeting room carrying a takeout box from the vegan restaurant across the street. "Hey," he called to the people straggling in. "Anybody want to try fried pickles?"

After the session, he cracked jokes and talked about sex and drugs.

Levine runs things with a casualness that might make a Tibetan lama cringe, but that's what attracted Holly Brown, 39, a self-described "goth girl" who has belonged to Against the Stream since it opened.

"We all respect the Dalai Lama, but we're living a totally different life than him," she said. "Noah's living our same life."
TOP