Living in the here and now

Brisbane, Australia -- EIGHT possessions. That is all a Buddhist monk can own. Three robes, an alms bowl, a needle for mending robes, a razor for shaving, a water filter and a bathing cloth. 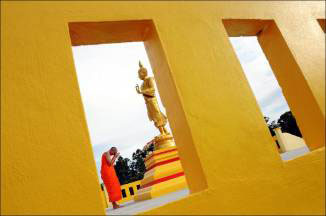 Thai Buddhist monks are also celibate and discouraged from even embracing another person, unless it is their parents. They start each day at sunrise and cannot eat after noon.

They forsake “dressing up and beautifying themselves’’, must shave their head and are forbidden to sing or dance.

Food is provided by the community or in their alms bowl, but they do not beg for food, they merely carry the bowl.

Wearing a bright orange robe, Ajahn Joe is one of six monks who live at the Wat Thai Buddharam temple in Forestdale, which has 2000 members. Born in England, Ajahn Joe came to Australia with his family when he was only one.

Spending most of his school years in Sydney until Year 10, his family moved to Brisbane, where he attended Beenleigh State High School for a short time.
After working first at his parents’ petrol station and then as a waiter, Ajahn Joe moved to Melbourne.

He said he moved for love, but when that did not work out, he shared a house with a girl who was Buddhist.

“I read some of her books (on Buddhism) and wanted to find out more so went to the Thai temple with her,’’ he said.

Raised as a Protestant, the visit was a life-changing experience, one which led to him becoming a monk after six months’ training, age 21.

“Everyone wants to be happy. I couldn’t find clear advice on how to do that in the Christianity I knew, and while looking for happiness, I found Buddhism,’’ he said.
Now 44, Ajahn Joe said Buddhism matched his “undercurrents’’ for wanting to live a more simple life.

But after six years as a monk, Ajahn Joe left the monk community to become a layman.

As a layman for the next 15 years, he studied a Bachelor of Arts at The University of Queensland, majoring in religious studies, while working as a personal assistant for a real estate agent.

Last year he returned as a monk after feeling “uncomfortable with the capitalist culture and the amount of greed it promotes’’.

Today, he lives in a wooden hut on the temple grounds, measuring 3m by 3m.  His hut has no electricity or running water.

Twice a day, he and the other monks attend chanting and meditation sessions.
Ajahn Joe also gives talks on Buddhist teachings.  He is also studying a Masters of Arts in religious studies through UQ.

He also runs the temple’s free meditation classes every night at 7pm.
“Meditation is about the present.  It’s all about experiencing life here and now. If the mind and body are together you’re very relaxed,’’ he said.

“It’s about experiencing life in its fullness, in the present moment.’’

He said people were addicted to the five sense pleasures of “seeing, hearing, smelling, tasting and touching’’.

“But that sort of happiness is not satisfying – in Buddhism, it focuses pleasure on the mind, the sixth sense,’’ he said.

Ajahn Joe said it was his intention to always be a monk, and while he was happier now than he had ever been, he said he still missed hugs and dancing.

“There are pros and cons in every lifestyle,’’ Ajahn Joe said.

“You just have to learn to face and recognise the worry, get to know what causes it and stop it.’’