Former nurse, now a Buddhist nun will teach that change is inevitable

Portland, Oregon (USA) -- Ani Gilda Paldron Taylor was a nurse in the 1960s, confronting death and dying on a daily basis, when she began to think about suffering. A Christian at the time, she asked her Episcopal priest to explain why suffering seemed to be inevitable. 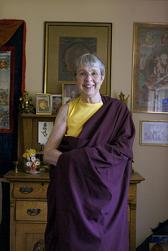 << Beth Nakamura/The Oregonian
Ani Gilda Paldron Taylor is an Oregonian, a Tibetan Buddhis nun, a retired nurses and a survivor of breast cancer, and brain injury at at least one recession.

"That did nothing but cause frustration," says Taylor, now 74 and a survivor of breast cancer, a brain injury and at least one economic recession.

She's also now a Tibetan Buddhist nun who thinks her own experience with suffering might help others who are struggling in today's economy.

Taylor, a native Oregonian and the leader of Portland Sakya Center, is offering a free series of conversations about fear and suffering. It's time, she says, to set aside the tongue-twisting jargon of Tibetan Buddhism and offer help to people, whether they have spiritual backgrounds or not, who are jobless, living on reduced incomes or facing the loss of their homes.

"If you were working in an emergency room," she says, "and someone came in with a headache and someone else was bleeding out of their belly, who would you attend to first?

"There's a lot of bleeding going on right now. Let's try to control the hemorrhaging."

In an interview, Taylor talked about suffering and the Buddha's insights. Her responses have been edited for clarity and brevity.
Isn't it a leap from the end-of-life suffering you saw as a nurse to the end-of-a-job suffering so many people feel now?

Losing a job is just like a death. Our jobs are who we are. I've been fired and found that I didn't have an identity beyond my job. There are stages, emotions to move through when you lose a job: disbelief, anger, sadness. I've been down this garden path before. I've experienced the terrors of economic downturns, of having your salary depend on the economy.

Now, even people who are meaningfully employed -- and there's no chance they'll lose their jobs -- still have fear. Fear is worse than the measles. Everybody catches it.

Isn't fear a reasonable response given the economic situation?

Fear comes, and then paranoia arises. We think, "I am the only one this is happening to. I'm the only one feeling shame because I've lost a job." Or, "I'm working in a grocery store or a service station." Self-cherishing plays such a prominent role.

What do you mean by "self-cherishing"?

Self-cherishing describes a person who is interested only in their personal well-being, which could be a need for recognition or affirmation by others. Wisdom and compassion produce an individual who is totally focused on others.

What's an example of a tool that Buddhism offers in the face of suffering?

Impermanence -- thinking that this won't last forever. "Change" is the same thing as impermanence. We tend to cling to things so much. Somehow we think that everything in our lives should be as solid as the pyramids -- and you've seen what happened to them over the years. Trying to avoid change is like standing on sand.

I'm not suggesting it's the answer to all things. But stabilizing our minds is a great benefit, the ability to sit down and not think, not to grab hold of fear and not to look into the future.

But people looking for jobs are looking into the future, looking after their futures. Is that a problem?

Sometimes, if fear plays a role. If you've had cancer, and a pain or lump appears, you see it and think "cancer." Fantasizing too much before an interview distracts you from the qualities that you would bring to a job. When I was a health industry recruiter, I'd advise people to stop projecting into the future and come back to where they were. Look at your own history. What have you survived before?

Is it better to look to the past?

So, is there a Buddhist bottom line?

It's important to accept change. You are more than you think you are. The Buddha taught that we are all, by nature, pure, with no blemish, no stain. The bottom line is that we're all pure nature and we can draw upon a stream of consciousness that has always existed and will continue to exist.