A Lifelong Fascination with Korean Buddhism

Seoul, South Korea -- An American university student full of existent questions took off and got on a plane to Bangkok in 1972. He studied Hinayana Buddhism for a year in Thailand, met Korean Buddhist monks there and was attracted to Korean Buddhism. In 1974, he finally visited Korea, was given the Buddhist name of Hyemyeong at the Songgwang Temple in Suncheon, South Jeolla Province and trained and meditated for five years. 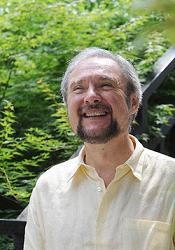 Now a 56-year-old professor of Asian languages and cultures, Robert Buswell is director of the Center for Buddhist Studies at University of California, Los Angeles and one of the foremost Western scholars on Korean Buddhism.

Last month, Buswell was appointed as the head of the Academy of Buddhist Studies at Dongguk University for one year. "I received the appointment certificate from Dongguk University on June 15. I agreed to come during the summer and winter vacations to Korea because I also teach at UCLA," he says.

Buswell won PhD from UC Berkeley in 1985 with a dissertation titled, "The Korean Origin of the Vajrasamadhi-Sutra: A Case Study in Determining the Dating, Provenance, and Authorship of a Buddhist Apocryphal Scripture." He established himself as a leading scholar on Korean Buddhism by translating Wonhyo's Vajrasamadhi-Sutra and the writings of Jinul.

"I think it is a good opportunity for me as well as for Dongguk University to make Korean Buddhism globally known," he says in his succinct Korean, "The biggest advantage of this appointment is that it lets me stay in Seoul longer. I can meet with many scholars and learn the latest research trends." When asked if he believes in karma, Buswell says yes. "I think I would be doing the same thing in the next life as well."