DHARAMSALA, India -- The Gyalwang Karmapa is the spiritual head of the Karma Kagyu sect of Tibetan Buddhism and thus considered the number three lama in Tibetan Buddhism. Karmapa means "the one who carries out Buddha activity" or "the embodiment of all the activities of the Buddhas". 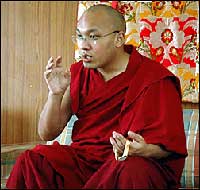 Like the Dalai Lama did in 1959, the current 17th Karmapa, Ogyen Trinley Dorjee, fled his native land in 1999 to Nepal and then India to pursue full religious and other freedoms. Attaching himself to the Dalai Lama, the Karmapa now lives in a temporal residence at the Gyuto Tantric Monastery in Sidhbari, the suburb near Dharamsala in northern India where the Dalai Lama heads the Tibetan government in exile.

The Karmapa's dramatic escape from Tibet made him a hero to exiled Tibetans and captured world attention. He was just 14, but the Tibetan diaspora immediately saw in him something special - strong personal charisma combined with the vigor of youth. Some already saw, even then, a potential leader in his own right.

Now a young man, many in the exiled Tibetan community believe the 25-year-old Karmapa will become their next spiritual leader after their god-king the Dalai Lama, who has sought to blend modernism with tradition, passes away.

Belonging to the Black Hat lineage, the Karmapa Lama is an exceptionally intelligent young monk. Although Indian authorities have barred him from traveling to the Rumtek Monastery, his order's seat in exile in the Indian state of Sikkim near the Chinese border, his influence cannot be contained. It seems to be growing particularly among exiled Tibetan youths, youths inside Tibet and Buddhists around the world.

Every day, scores of visitors, mostly Tibetan, Western, Chinese or Taiwanese Buddhists, arrive at his monastery to seek his blessings in private or attend his public teachings.

The Karmapa's importance is growing as the Dalai Lama is aging. Once the 74-year-old spiritual guru departs, the lengthy process of choosing his reincarnation means years may pass before the new Dalai Lama is ready to assume leadership and guide Tibetans.

Although, due to tradition, the Karmapa can never replace the Dalai Lama as the supreme Tibetan spiritual leader, he can nonetheless act as a force to lead Tibetans in exile in their 50-year-long struggle to return to their homeland with freedom. But questions naturally arise over such a possibility. Will the Karmapa Lama be willing to lead the "Free Tibet" movement? If so, what will be his approach? Will he continue the Dalai Lama's "Middle Way" in dealing with Beijing to seek the "high-degree autonomy" of Tibet? Or will he seek a fully independent Tibet, as some radical young Tibetans hope for? Could he become more conciliatory with Beijing?

Asia Times Online had the opportunity to interview the 17th Karmapa Lama on July 8 at his temporal residence, the Gyuto Tantric Monastery. It was surrounded by tight security provided by both Tibetan and Indian guards. Inside the rooftop room of the monastery, where Tibetan Thangka paintings drape the walls and colorful carpets are spread across the floor, the Karmapa met in private, preferring to use translators for the interview. Although his secretary asked there be no political questions, the Karmapa answered most questions patiently, weighing his words.

Saransh Sehgal: His Holiness, how do the Tibetan people in exile and inside Tibet see you as a religious leader and beyond?

His Holiness the Karmapa: There are different opinions. It is difficult to say that they all conform with the reality. However, not only Tibetan religion, but also Tibetan culture, society and the Tibetan people are facing hardships. Therefore, there is a possibility [of me] acting not only as a religious leader but as a leader of a society with all its aspects ... Or should I say, there is a possibility [of me] giving guidance.

SS: His Holiness, you have maintained a distance from political activities in support of the Tibetan struggle. How long do you believe you can keep that stance?

HH: There is nothing unusual about it. On one side, the Karmapa is a spiritual leader with a history of more than 800 years. Therefore, as I am the one upholding [the lineage of karma], it would not be proper for me to act slapdash. Speaking from another perspective, the present situation of Tibet not only concerns religion, but is also related to human well-being ... I think it is important to consider the other aspects rather than holding only the political aspect and thinking of it as the most important.

SS: The [present Tibetan] prime minister in exile is ending [his term] next year, there will be democratic elections by the Tibetans in exile - how do you view this matter?

HH: I don't know much about it. I have not yet paid special attention to that. All I can do is pray so that it will come out well.

HH: Let's put it this way, people of modern times, for example people in highly developed Western nations, are [looking] for peace of mind. They have undergone tremendous material development, [but] in between they are facing problems, which instead of helping their material development put them under extra burdens or pressure ... They have come to realize the importance of peace of mind and in Buddhism [the] presentation of [these] aspects of the mind are comprehensive and clear. I think this is one of the reasons why people's interest in Buddhism is growing. Likewise, many noble beings like His Holiness the Dalai Lama are visiting through the world and [have] spoken out their views. People are moved. I think this is also one of the reasons behind the growing interest in Tibetan Buddhism.

SS: His Holiness, will you stick to the Middle Way that His Holiness the Dalai Lama has been continuing?

HH: I think the guidance provided by His Holiness the Dalai Lama, with a great intention of bringing a swift, just and sincere - not "Victory to oneself and defeat to the others" - solution to the Tibet cause, is very great.

SS: His Holiness, the entire community of Tibetan youths over here in exile, as well as hopefully those inside Tibet, take you as a young leader. How do you see your interactions with Tibetan youths?

HH: I have nothing to do other than as I said previously, though I am physically young, mentally I am a traditionalist. This is my position. Therefore, with this as a reason I hope to maintain a good relation between past or tradition and modernity, and act as a liaison between the two.

SS: How do you see the issue of succession of His Holiness the Dalai Lama?

HH: His Holiness is well aware of the issues. I think His Holiness will definitely give clear instructions and guidance. I have always been thinking of it, I have no further comments.

SS: But there are times where He said, that there may also be a female Dalai Lama also. Or maybe a young lama ...

HH: I think His Holiness will clarify all these issues. Those were His Holiness' passing remarks, not officially spoken. His Holiness said that such things are possible.

SS: Are you worried that Tibetan culture and religion is dying under Chinese rule?

SS: His Holiness, does China hope to have a dialogue with you, as you are very much recognized as a religious leader in China?

HH: Me! I am not [involved]. His Holiness the Dalai Lama, the spiritual and temporal leader of Tibet and the Tibetan government in exile are in the process of dialogue. Not me.

SS: Are you able to get messages from your family in Tibet?

SS: What are your interests, apart from spiritual studies and how do you plan to further educate yourself?

SS: His Holiness, Can you describe your experience in India till now?

HH: I am amazed by the freedom to engage in various spiritual and political activities that is enjoyed by the huge number of Tibetans settling in India, and the rights the government of India has extended to us to practice our livelihood and Dharma activities - [this] has been impressive.

SS: His Holiness, how do you see the future of Tibet?

SS: When do you expect to return to Tibet?

HH: I don't know. On this also, I am not sure because not only me, but all [Tibetans] wish to return. When we will be able to return, no one knows.