Berkeley, CA (USA) -- Diana Winston spent more than a decade pursuing inner peace and serenity within the walls of Buddhist monasteries in Southeast Asia, immersed in periods of mindful meditation that lasted from just a few hours to a year. 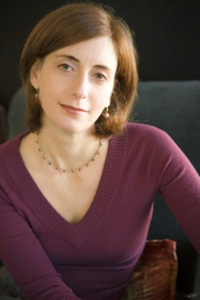 << Diana Winston rarely talks about the spiritual evolution that brought her here, to a large university where researchers are discovering that the practice of mindfulness meditation has many physical and psychological benefits, including slowing the progression of HIV in patients suffering from stress and helping ADHD teens focus.

But that's not the journey she imagines most people would take.

"My life story is not a good example of what I expect people to follow," she said, smiling, as she sat in her office in the Semel Institute for Neuroscience and Human Behavior.

In fact, Winston rarely talks about the spiritual evolution that brought her here, to a large university where researchers are discovering that the practice of mindfulness meditation has many physical and psychological benefits, including slowing the progression of HIV in patients suffering from stress and helping ADHD teens focus.

While it was this kind of research that brought her to UCLA, Winston, as director of mindfulness education, primarily teaches mentally healthy — yet stressed-out — people. She also shares what she has learned from her years of practicing mindful meditation as a Buddhist with those dealing with difficulties such as anxiety, depression and eating disorders.
Going beyond religion

"To me, Buddhism is really secondary because the questions people are dealing with are all the same: How do we live happier, healthier and saner lives and have more peace? It doesn't matter whether you are Christian, Jewish, Muslim or Buddhist. These techniques are tremendously valuable, and so I've learned to teach them in a way that makes them accessible to all."

Through the Mindfulness Awareness Research Center (MARC), Winston has taught the practice to hundreds of teens and adults, including Bruin football players, medical students, interns and residents, and entire UCLA departments seeking to de-stress. All her classes are open to the general public.

"Most people are not going to go live in a monastery," she said. "So I'm interested in how we can bring mindfulness into our lives in the midst of family, job and other responsibilities. It's not necessarily about being mindful every second. It's about what you can do when you're caught in traffic or getting ready to meet your boss. How can I stop, take a breath and manage my anxiety? How can I live life more fully?

Winston first became exposed to Buddhism during her junior year abroad in Thailand as a Brown University student. But it wasn't until after graduation when she worked for the Free Tibet movement in Dharamsala, India, headquarters for the Dalai Lama's government in exile, that she became "really hooked on Buddhist teachings because they seemed to explain a lot of things in my life," she said. "I saw the way I was endlessly pursuing praise and success, and trying to make something of myself outside of myself." Buddhists, she found, presented her with an alternative, "that happiness wasn't about something outside of myself, but can come through inner peace."

Over the ensuing years, she deepened her study of Buddhism and Vipassana (mindfulness) meditation techniques. Going on meditation retreats in Thailand and on the East Coast transformed her life, she found. "It was like going to a spiritual bootcamp. I was learning to find peace within myself, despite life's ups and downs, cultivating more compassion, self-acceptance and kindness for myself and others."

Combining social activism with Buddhism, Winston started a volunteer program within the Buddhist Peace Fellowship in the San Francisco Bay Area that offered training, study and meditation to volunteers who worked in homeless shelters, soup kitchens and environmentalist organizations.

In 1997, she felt the need to fully immerse herself in a spiritual life so she traveled to a monastery in Burma to spend a year living as a Buddhist nun, "which meant I had to shave my head, put all my possessions in storage and live by certain precepts." There was to be no reading or writing; no eating after 12 noon; no sex, drugs or alcohol; and, oddly enough, no sleeping on high and luxurious beds. "It was easy to give up those things because I was so interested in what I was doing. It was so powerful to me," she recalled.

Mindful meditation consumed all her waking hours — sleeping was limited. This austere lifestyle, spent mostly in silence, left her feeling lonely at times and sometimes sick because of the diet and heat. "But it becomes your life. You just live it. Over time, it made me learn to trust myself and know I had a capacity to handle whatever life brought me," she said.

"Parts of it, I hated; and parts of it, I loved," she said. "When you spend that much time with yourself, your mind gets very, very subtle. You become very aware, and all sorts of insights and self-understanding arise. It's pretty amazing." The experience wasn't just self-absorbing, but helped her develop "an open heart," heightening her sense of compassion for others.
Giving back

After a year, she said, "I was done. I felt I could sit here in a monastery for 20 years, but what about the rest of the world where there was so much suffering?"

Feeling the need to give back, Winston began training to teach mindfulness. She first taught it to children in India and later to teens and adults at the Spirit Rock Meditation Center in Woodacre, Calif. "The teens would primarily come because their parents forced them," she said. "One of my philosophies is that you can't force anybody to do it." But by helping them connect on a deeper level with other teens, Winston found a way to engage them. The program she built — she subsequently wrote a book about mindfulness for teens — was very successful and now replicated by other organizations.

"I began to think: How do we take this out of the insular world of Buddhism into the wider world in a way that makes real change possible?"

An invitation from Dr. Susan Smalley to join a research project at the Semel Institute and ultimately teach mindfulness at the new MARC center gave her what she was looking for — a shared vision that mindfulness could be applied in a secular, mainstream way to life.

Now Winston, who is about to give birth to her first baby, is ready to conquer the next frontier – "practicing mindfulness with a screaming infant," she said, laughing.

For information on upcoming classes and meditations that can be downloaded free, visit the Mindfulness Awareness Research Center at www.marc.ucla.edu.