A Buddhist monk coming to Jackson this week might be able to help you. Mathieu Ricard is a campaigner for happiness, who also does scientific research to prove it’s benefits. 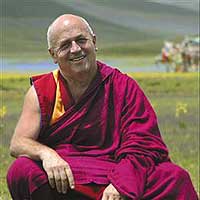 At a lecture at the Center for the Arts Tuesday, Ricard will talk about how meditation and compassion can lead people to achieve a level of happiness they thought were impossible. But Sunday at the Murie Center he’ll take people out into the fall colors to put those theories into practice.

Ricard, dubbed the happiest man alive, is a Buddhist monk based in Nepal who also serves as the French translator for the Dalai Lama.

“We will be doing a walk in nature and then a discussion and teaching around the fire ring at the Murie Center,” Center for Wonder’s executive director Carrie Geraci said.
“The theme of the talk is how we can use that state of outer beauty that we see in nature to inspire a state of inner beauty within ourselves by really looking at cultivating our feelings of empathy and respect for the environment,”

The event is open to children nine years of age and older. Teachers will be on hand with other activities for the kids if their attention span proves too short for the three hour, contemplative event.

After pursuing a PhD in molecular genetics at the Pasteur institute, Ricard devoted his live to Buddhism. He still does scientific research to back up his spiritual work; proving that meditation can reduce blood pressure, for instance.
Geraci said he is a charismatic and articulate teacher who can put Buddhist teachings into a widely palatable form.

“He’s such an amazibng teacher because of his Western education, so whether you’ve been a Buddhist practitioner for half of your life, just got into it or never tried to meditate and haven’t been introduced to Buddhism he’s so artistic and knowledgeable that this will be a mind opening experience for everyone,” Geraci said.

“His main teaching is how we can find more happiness, happiness in our lives, and who doesn’t want that,” she added.

Ricard will also host a two-day meditation retreat, which is already full. JHW

“Contemplation in Nature” is 3 p.m., Sunday at the Murie Center in GTNP. Free. Ricard’s lecture is 7 p.m., Sept. 22 at the Center for the Arts, $20 suggested donation.

COURTESY CENTER OF WONDER
Buddhist monk Mathieu Ricard will teach you the path to happiness.