Dalai Lama, the spiritual leader who won't slow down

DHARAMSHALA, India -- At 74, the Dalai Lama keeps up a globe-trotting schedule that would tire anyone half his age and aides say it is impossible to slow him down. 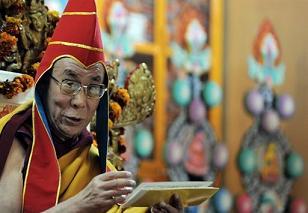 << At 74, the Dalai Lama keeps up a globe-trotting schedule that would tire anyone half his age

In the last two months, the peripatetic spiritual leader, who calls himself a "simple Buddhist monk" despite being "god-king" to six million Tibetans, has been to Taiwan, Switzerland, Czech Republic, Slovakia, Germany and Poland.

Now the Dalai Lama is on a whirlwind tour of North America where the Memphis mayor Pro Tem Lowery hit the headlines after giving him a genial, informal "fist-bump" greeting on his arrival in the city last week.

"I tell him to slow down," Tibetan premier-in-exile Samdhong Rinpoche said in Dharamshala, the mist-shrouded Indian hill station where the Dalai Lama set up headquarters after fleeing Tibet half a century ago to escape Chinese rule.

The maroon-robed monk -- known for his infectious guffaw, oversized spectacles and teachings about peace -- keeps up his gruelling pace despite two hospitalisations in the past year, albeit for relatively minor ailments such as gallstones.

"He has an extraordinary energy and capacity. I can't keep pace with him -- and I'm three years younger," Rinpoche said in an interview.

On a typical day in tiny Dharamshala, ringed by pristine Himalayan peaks and reached by crumbling zig-zag roads with vertiginous drops to pine-clad valleys, the Nobel Peace Laureate rises at 3:30 am.

The Dalai Lama, the most powerful rallying point for Tibetans, both in exile and in their homeland, then prays and meditates for two hours, aides say.

The spiritual leader was recognised by a search party of Buddhist monks as the reincarnation of the previous 13th Dalai Lama when he was just two years old.

His routine includes a short early morning walk around the flower-filled garden of his residence but if it's raining, he uses a treadmill.

"He also does prostrations which is very good exercise," Dalai Lama spokesman Tenzin Toplak told AFP, describing the action of throwing oneself face-down on the floor.

Later, the Dalai Lama, whose name loosely translates as "Ocean of Wisdom," eats a breakfast of porridge, bread and preserves served with tea while he listens to the BBC World Service.

Then he has more meditation -- to help prepare him for death though he says he hopes to live to be 100 -- and studies Buddhist texts. Next, it's time for lunch which for Buddhist monks must begin before noon.

The close-cropped balding monk works out of the yellow three-storied Namgyal Temple, but lives in a simple house nearby.

He eats a healthy, mainly vegetarian diet that he keeps up when travelling the world preaching that compromise and non-violence are central tenets of Buddhism.

China considers the Dalai Lama a "splittist," despite his repeated calls for autonomy rather than independence for Tibet, and maintains pressure on world leaders not to meet him.

Even though the Dalai Lama is going to Washington next month, US President Barack Obama will only meet him after his maiden presidential visit to China in November, officials say.

Analysts say the decision not to meet the Dalai Lama is to avoid souring Obama's Chinese visit.

In the afternoons, the Dalai Lama has audiences with officials, followers and others who wish to see him -- especially refugees who have dodged Chinese border guards to leave Tibet.

For recreation, the Dalai Lama tinkers with what he calls "mechanical things" like watches -- although he says he is hopeless with computers -- and pours over encylopedias and picture books about the Second World War.

"I would say it's because of his self-discipline that he's able to keep on with this hectic schedule -- he won't deviate much from his daily routine," said Toplak, who has worked for the Dalai Lama for 13 years.

Those close to the Dalai Lama say he finds it tough to turn down requests for audiences.

"He has so many invitations and he hates to disappoint anyone," said the Tibetan prime minister-in-exile.

"He can only accept 20 percent of the requests and invitations he gets. Eighty percent he has to turn down and he's still overly burdened," he said.

After hinting he might retire, the Dalai Lama now has ruled that out.

"There is no point or question of retirement," he said recently.