MOUNT TREMPER, NY (USA) -- As monks gather at the Zen Mountain Monastery here to celebrate the life of their recently deceased abbot and spiritual leader, they emit a continuing mantra about his life: teacher. 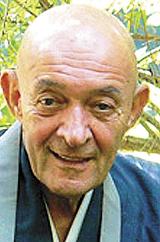 << John Daido Loori, who carried the title roshi, died on Friday at age 78 after battling cancer.

John Daido Loori, who carried the title roshi, died at the monastery on Friday at age 78 after battling cancer.

“He was our spiritual director, but his overarching role was guiding and teaching,” said Geoffrey Shugen Arnold, a sensei, or teacher, who serves as vice abbot and branch president of the Zen Center of New York and also manages the National Buddhist Prison Sangha.

“Everyone who comes here experienced him in the present tense as teacher, but the monastery really opened them up to a whole new way of living and being,” Arnold said on Friday.

Loori was founder of the Mountains and Rivers Order of Zen Buddhism, abbot of the Zen Mountain Monastery on Plank Road in Mount Tremper and one of the most influential Zen teachers in the West.

Loori came from a working-class family background in Jersey City, N.J., and it was his love of photography from an early age that led him to seek a deeper spiritual connection in his life. He underwent 14 years of lay and monastic Zen training in New York and California, and in 1980, he founded the Mountains and Rivers Order of Zen Buddhism, one of the leading Zen training centers in the United States, at the Zen Mountain Monastery.

His life’s work was recognized by Franklin Pierce University in May of this year with an honorary doctor of humane letters degree.

The Zen Mountain Monastery is a monastic training center that provides traditional but distinctly Western Zen training to people of all ages and religious backgrounds. The monastery offers a variety of programs and retreats for both beginning and advanced Buddhist practitioners.

The monastery’s training schedule, with a resident community of female and male monastics, is a continuation of the centuries-old tradition established in the Zen Buddhist monasteries of China and Japan.

Loori, though dedicated to maintaining authentic Zen training, developed a singular style, called the Eight Gates of Zen, based on the Eightfold Path, involving both monastic and lay practitioners in a program of study that encompassed every aspect of daily life.

Regarded as someone with sharp business skills, he nevertheless admitted that founding the monastery was “the most illogical thing he had ever done,” Arnold said with a laugh. “He said, ‘I have no money and no people.’ But I think he knew at a deeply intuitive level that he was correct.”

Arnold said Loori’s way of helping students reach a deeper level of cognition about themselves was twofold: He had a lifelong relationship with art, recognizing that, for many people, art is an entry into the spiritual life; and he had a great love of nature.

“He believed he should speak for those who cannot speak for themselves,” Arnold said, explaining that although environmentalism, per se, is not specifically part of traditional Buddhist teaching, Loori nevertheless recognized the deep obligation in Buddhism to take care of things.

Konrad Ryushin Marchaj, another sensei and vice abbot of the Zen Mountain Monastery, observed that Loori, as a teacher, strove for a deep and intimate relationship with students, helping them clarify for themselves who they are and what they can offer.

“On a certain level, it’s really very simple,” Marchaj said. “He was helping each of us to become as human as we can be.” In that relationship, he said, the vow is to learn how closely one can know himself and the other person.

Marchaj said Loori selected him as a sensei because Loori recognized he would carry those vows and transmit them to future generations.

“He recognized that to be a teacher is to be a student for the rest of our live,” he said.

Judy Hojin Kimmel, a Dharma holder, in commenting on Loori’s twofold commitment to Zen Buddhism — the arts and the environment — said he saw both as part of living a complete life.

“We must take care of expression in our lives, and the environment,” she said. “He always said the question is to go as deep as we can to see what is really true — who we are and what we have to offer in gratitude for receiving the gift of this life.”

Loori was the author of 20 books on Buddhism, as well as an award-winning photographer and videographer whose work was exhibited at the Museum of Natural History, among other venues. His art and wildlife photography formed the core of a unique teaching program that integrated art and wilderness training by cultivating a deep appreciation of the relationship of Zen to the natural environment.

Loori was diagnosed with lung cancer about 18 months ago. His funeral service, at the Zen Mountain Monastery, will be announced after the traditional 49-day waiting period. Arrangements are by the E.B. Gormley Funeral Home, 87 Main St., Phoenicia.

After a ceremony in November, Arnold will succeed Loori as head of the order, and Marchaj will become abbot of the monastery.