Darjeeling, India -- The handwriting is somewhat shaky and there are some spelling corrections. Par for the course for an 11-year-old. 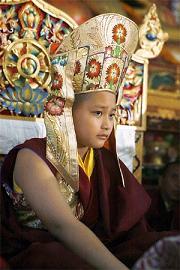 << Eleven-year-old Jigme Wangchuk was enthroned last week and, as a leader, is aware of the responsibilites | Photo: Suman Baraily.

But the thoughts expressed display an uncommon fervour between child-like confessions: “I do miss being a joyful schoolboy, and my friends, my home, my grandparents, aunts and uncles,” admits Jigme Wangchuk. Jigme, the Boston schoolboy who was identified — and enthroned last week —  as the reincarnation of the Gyalwa Lorepa, a high-ranking spiritual leader of the Drukpa Kagyu sect of Tantrayana Buddhism, has switched universes with astounding ease.

Born on April 10, 1998 in the US to Chosang and Dichen Wangchuk, who had migrated to Boston from India, Jigme went to St Peter School, was a die-hard fan of the Boston Celtics basketball team, and liked hip-hop, rock music, Internet games and McDonald’s burgers. Now, at the Druk Sangag Choeling monastery in Dali, 4 km from Darjeeling, he wakes up at 5 a m and first prays for his ailing grandmother. Then he learns to read and memorise Tibetan prayers and studies Buddhist philosophy for the rest of the day. During breaks, he eases off with board games or plays with another young reincarnate, Chokyi Gyatso from Ladakh. His day ends at 8.30 pm.

He tells HT: “People think it’s a very big change and I would feel very sad and isolated. But I don’t feel lonely at all. In fact, I am quite busy and have a lot of things to learn.”

It is an equanimity he seems to have been born with. “He never argued and spoke little, but was loved by everyone. He had something magnetic about him,” says Karma Rinpoche, his uncle. His fifth-grade teacher, Mark E. Smith, recalls a “wonderful boy” who “had a great sense of humour and was always looking out for his classmates”. Smith talks of his student’s creative side: “He enjoyed the style of anime (Japanese animation) and had a great imagination which came out in his writing assignments.”

His mother Dichen fills in another shade to her son’s personality, saying his early ambitions were to be either a zoo-keeper or an archaeologist. “He always had an affinity towards animals, antiques and historical things,” she says. Jigme would also have strange visions and would often talk about seeing dragons, symbols auspicious in Buddhism. “Two years ago on a visit to the Kagyu Nalanda Monastery in Mysore, Jigme suddenly stopped playing and started narrating his past life as if in a trance,”recalls Dichen. He talked of living in a monastery somewhere in the Himalayas, surrounded by huge rocks and a dragon, 32 feet in length.

Two hours after the incident, the 12th Gyalwang Drukpa, head of the Drukpa Kagyu sect, declared that having used all the prescribed methods he had identified Jigme as the reincarnation of Gyalwa Lorepa — the first in 759 years. The Wangchuks sold their Tibetan restaurant in Boston and relocated to Darjeeling along with Jigme’s sister Tashi Norzom. It was not easy. “I have been crying for the past five months, but have come to terms with it now,” admits Dichen. Her son took the transition far better. “I asked whether he would like to go back to Boston. He said he has a lot of responsibility to a lot of people who have a lot of hope in him. This makes him very strong,”she says.

He will need that strength. Gyalwang Drukpa says, “I am very careful and conservative in recognising reincarnations, because they all have a very heavy responsibility to make Samsara (the world of sentient beings) a better place.” The Lorepa will receive his monastic education in Darjeeling for the next six to seven years after which he will move to Bhutan for higher studies. But right now, he is looking forward to a trip to Ladakh. “His Holiness said he will be taking me and my parents to Ladakh in February... I heard it is very cold, like minus 40 degrees, so I think my winter clothing from Boston will help,” says the 11 year old. His immediate past remains as vivid as his centuries-old one.