Bangkok, Thailand -- The Pridi Banomyong Institute is a highly appropriate venue to hold a ceremony to mark the 60th birthday celebrations on Nov 14 for Seksan Prasertkul. 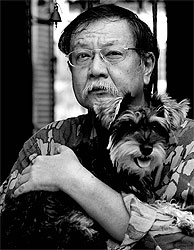 Ajarn Pridi Banomyong was an important leader of the People's Party, which overthrew absolute monarchy. Ajarn Pridi fought unconditionally for an eternal truth: the fact that everyone is equal and that people are equally capable political subjects since they are the actual owners of the country.

This presumption of equality, which was denied under absolutism, propelled the 1932 Revolution and was also vital for the organisation of the Seri Thai Movement against imperialism during World War Two.

We are still living in the political sequence kicked off by the 1932 Revolution, the truth about which we still have to continue struggling for.

Sadly, Mr Pridi's good deeds disintegrated in the wake of the 1947 coup d'etat, which obliterated the substance of peace, justice, and equality in Thai society. The people ultimately demanded a new constitution, culminating in the events of Oct 14, 1973.

For a while, it seemed that the people would be able to reclaim and revive democracy in the country.

Seksan Prasertkul was arguably the most brilliant leader in this mass movement and uprising. Similar to Pridi, Mr Seksan was soon abandoned by the mainstream and absolutist forces in society. But unlike the late statesman, Mr Seksan was not demonised because he was far away from the mantle of power. In this precise sense, he was more fortunate than Pridi.

In any case, Mr Seksan and other fellow travellers in the quest for democracy and egalitarianism (against absolutism and militarism which were backed by imperialism and transnational capitalism) were brutally crushed in the events of Oct 6, 1976. Many of them fled to the jungle, Mr Seksan included.

It was unfortunate that the Communist Party of Thailand (CPT) was thoroughly dominated by the Chinese Communist Party (CCP). The CPT had no room for a concept of Dhammic Socialism as espoused by the late Buddhadasa Bhikkhu or such a notion as national dignity and independence from the clutch of Chinese imperialism (which was no better than American imperialism).

At least Mr Seksan detected the hypocrisy of the CCP early on, well before many of his fellow travellers did. In the end, he chose to "reconcile" with the Thai state and became a professor at his alma mater, Thammasat University. He was even elected as dean of the political science faculty at one time.

Eventually, however, Mr Seksan became disillusioned with the university (and other mainstream universities in general). His was an independent and brilliant mind. He could see through the charades.

Pridi Banomyong established Thammasat University more than seven decades ago with the hope that it would become a radical and responsible agent of social and political transformation. It is now merely a mediocre institution lacking vision and conscience for social justice and equality.

Compelled to live in exile for the rest of his life after the 1947 coup, Pridi had an opportunity to cultivate critical self-reflection and to "refine" himself through the taming of egotism and arrogance and the subtracting of oneself from self-aggrandisement. He never wavered from confronting the truth and maintaining fidelity to it. In this respect, Pridi was more fortunate than Mr Seksan.

Pridi was also fortunate to have a virtuous companion (kalayanamitta) in the person of his wife, Thanpuying Phoonsuk. A kalayanamitta is very important as he or she is supposed to be truthful and sincere in speech and blessing. A true friend can say things that the listener may rather not hear or may even want to disavow. A blessing that is devoid of truthfulness is not a blessing, for truth is the noblest thing.

To cut a long story short, my intention is to tell Mr Seksan that he lacks a kalyanamitta. He doesn't really have anyone to admonish or criticise him. He has only subordinates and assistants - admittedly dwindling in numbers through the years.

Books seem to serve as his real companion. A good sign is that Dhamma books have increasingly occupied Mr Seksan's archives. Above all, they are not the ordinary Dhamma books that people, especially the elites, like to read - books that are obsessed with fostering inner peace and inner distance from structural violence, books that disavow the dimension of social antagonism and emancipation.

Mr Seksan reads books that provide a broad as well as in-depth understanding of the Dhamma. He draws on the teachings of a variety of Buddhist denominations - Theravada, Mahayana, and Vajrayana. In a very admirable manner, he has firmly grasped the gist of the true Dhamma (Saddhamma).

Another way of putting this is that he has, by and large, achieved wisdom resulting from studies.

Being a product of Western education, Mr Seksan may still be in need of wisdom resulting from mental development or meditative practice; that is, wisdom that develops when the brain and heart or the mind and body are harmonised.

In any case, he seems to have greatly reduced egotism and selfish attachment.

It is often stated that democracy is characterised by liberty, equality and fraternity. It is however clear that existing democracies worldwide are in dire need of fraternity. As Mr Seksan has officially entered "old age" and has let go of many attachments, he should be in a good position to foster fraternity in Thai society, at the very least through his writings.

The successes of the early Pridi contributed to his failures as well as the numerous catastrophes that have bedevilled Thai society to this day. Likewise, the successes of the early Mr Seksan led to the troubles in his middle years. The older Mr Seksan may no longer desire worldly success. But now he is in a good position to tilt his wisdom derived from study, towards wisdom achieved through practice and wisdom earned from reflection. This will enable him to join hands with other contemporaries to foster fraternity in Thai society using the framework of Buddhism.

The revived fraternity will, in turn, help drive the notion of equality, both in the economic, political and cultural context. Then the path of liberty beyond capitalism may be opened up.In their conversation, which was carried on for four consecutive days, Pridi and Buddhadasa Bhikkhu attempted to dhammacise democracy in the Thai kingdom. Buddhadasa Bhikkhu proposed the idea of a utopian space of Dhammic Socialism. Pridi tried hard to make this a reality but ultimately failed.

Seksan Prasertkul may serve as an important link in the revival and accomplishment of this dream: an old dream in a new context and situation is as good as new.