Houston, TX (USA) -- As if a Mediterranean breeze wafted through Wallace Pack Unit's steel-reinforced walls and columns, the aromas of hummus, falafel and fattoush permeated the prison's classroom. 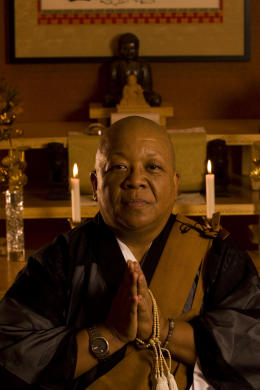 << Eric Kayne For the Chronicle
Rev. Myokei Caine-Barrett is the only woman in North America to lead a Nichiren Shu Buddhist congregation.

“I was moved; I wanted to cry — something so small could be huge and make them so happy,” said the Rev. Myokei Caine-Barrett, a Houston Buddhist priest who brought the vegetarian meal for the first time during her five-year ministry at the Texas Department of Criminal Justice's correctional facility outside Navasota.

To her 21-member congregation behind bars, Caine-Barrett brought foods that pleased more than their palates.

In this classroom that the inmates called “a little heaven” found in “a hellhole,” they feast on food for the soul Friday evenings and the occasional Sunday when Caine-Barrett makes the two-hour drive for her ministry.

“When I'm here chanting, I feel a sense of happiness and joy,” said inmate Jesse Peña. When the inmates leave the incense-filled classroom, Mason said, they “carry that energy” with them.

On this Sunday, the Mediterranean treats complemented a full-day retreat that began with a drum-accented chanting and a sermon on the teachings of Nichiren, the 13th-century Japanese founder of the namesake school of Buddhism. After a jovial lunch, a repentance session ensued, followed by a shakyo meditation, in which inmates, in deep concentration, hand-copied the Lotus Sutra that Nichiren followers revere as the Buddha's central wisdom.

The day concluded with a “refuge-taking” ceremony in which nine inmates took vows of faith and precepts to officially become disciples.

The ritual was as much a milestone in the inmates' spiritual quest as in Caine-Barrett's priesthood.

“This was the first time I initiated so many people at once,” she said. “I feel I have gained more from the experience than they do.”

Chaplain David Nichols, a Christian, said the Buddhist ministry tends to a need among prisoners. “She cares about the guys and is very dedicated,” he said.

Caine-Barrett's prison congregation grew slowly as her own Buddhist cultivation deepened. Started as a monthly program at a few inmates' request when she was a novice in training, the service became weekly after she was ordained in 2007.

The order, headquartered in Haywood, Calif., evolved from Nichiren Buddhism study groups started by Japanese immigrants in the early 20th century and has since established more than a dozen temples for its 1,000 members nationwide.

Caine-Barrett became associated with the order nine years ago after breaking away from Soka Gakkai, a lay Buddhist organization that also stemmed from Japan and Nichiren Buddhism, over differences in practice and organizational philosophy.

Her discovery of the Nichiren order and subsequent meeting with clergy members sparked her desire for a Houston branch and a full-time priesthood.

Born in Japan's Kawasaki City to her Japanese mother and African-American father, Caine-Barrett moved to the United States with her family at barely 2 and grew up mostly in El Paso. Her return to Japan in 2007 for her ordination was soul-stirring to her relatives there.

“My aunt said, ‘You've finally come home,' and they were happy to have a priest in the family,” she said. “I felt like I completed a full circle.”

That circle had a jagged start, though. She grew up rebellious, lonely and looking for something to fill a social void.

At 13, she attended a Buddhist gathering in El Paso, proving to be the start of her spiritual path.

She dropped out of college as a student activist against the Vietnam war, worked odd jobs and was eventually hired by the El Paso Natural Gas Co. Four years after the job transferred her to Houston in 1978, she was laid off when Burlington Northern Inc. bought her company, now called El Paso Corp.

Her Buddhist activities intensified in Houston. On the bus with a group back from a retreat in California, she got sick. The care showered on her by Michael Barrett, a group leader, led to their marriage.

When Caine-Barrett split from the Soka Gakkai group, Barrett and several members followed her and began their own weekly meeting at the couple's home in the Third Ward.

Barrett was “taken aback” at first by his wife's decision to seek priesthood but soon supported her and dedicated their home as a temple and the headquarters of their Nichiren Buddhist Sangha of Texas, of which he also assumed leadership.

“It was the next logical step for her. We've seen her faith crystallized,” said follower Christie Carrington, a friend of two decades. “She has always been a leader, a visionary.”

Caine-Barrett made herself known through word-of-mouth, Buddhist journals and public appearances in interfaith programs across the city. She created a “Meetup” social networking group to recruit potential members, and she live-streams her temple services on the Web.

Outside the prison, she has built a small congregation diverse in race and sexual orientation, with members scattered in Houston; Austin; San Antonio; Tampa, Fla.; Mexico; and Costa Rica.

At her home temple, a handful of adherents gather Wednesday nights for an hourlong service, and her Sunday full-morning program draws about a dozen devotees whose chanting accompanied by drums, bells and other instruments echoes in neighborhood streets.

“We're called the noisy Buddhists,” she said, noting chanting as an essential Nichiren practice. “I often open the windows so people can hear us.”

Except for the green walls with red trim and a banner flying at the door, the plain, one-story house looks like just another residence from outside.

She envisions one day building a stand-alone temple filled with people. But for now, her challenges are real: New members are hard to recruit, and money is scarce.

Faulconer said the difficulties are shared by the Nichiren order nationally as older-generation Japanese immigrants comprise much of the membership that lacks younger followers and ministers.

Caine-Barrett said some potential followers change their minds once learning the temple is home-based. Some participants come and go as they try to find a comfortable practice or they're drawn to better-known Buddhist traditions.

Bianca Schonberg, a black college administrator in search of a Buddhist group with African-American representation, said she is inspired by Caine-Barrett's “community-oriented spirit” but remains noncommittal to the Nichiren school because of its focus on chanting.

At the prison, however, chanting has been a big draw for the inmates, including those not ready to be initiated as Buddhists.

“I still believe in Christianity,” inmate Norman Larson said. “But when I chant and meditate here, I feel all the negativity is washed off me.”

Some of the Nichiren faithful have remained in touch with Caine-Barrett after their release. Dereck Esparza, who will soon be free, wants to return for Caine-Barrett's program and help other inmates.

“It's reassuring to hear this,” said Caine-Barrett, packing to leave the classroom as the incense dissipated and dusk fell.

Driving out of the Pack Unit, she flashed back on the same incense she smelled as a toddler in Japan.

“I didn't realize until now that the Buddhist seed was planted back then,” she said. “It will flower beautifully.”