In the spirit of love

Kuala Lumpur, Malaysia -- VENERABLE Hui Li was branded a devil and a “poisonous weed” by the locals in the early days of his missionary work in South Africa. 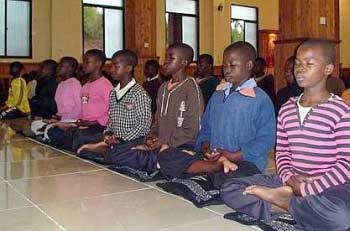 << Building strong minds: The children also get to learn and practise meditation.

“I was condemned by the local people, government officials and people of other faiths. They did not know what Buddhism is and have not seen a Buddhist monk in robes before,” he said.
Solid stances: Children at the Amitofo Care Centre in Malawi get to learn kung fu taught by masters from the Shaolin Temple in China.

He faced protest from the local church and local residents over the building of a Buddhist temple in Bronkhorstspruit, near Pretoria.

However, he remained adamant on his undertaking despite threats that his temple would be seized by the government.

“I had to remain calm, and practise patience and kindness before I could overcome the obstacles,” he said in an e-mail interview.

To prove his sincerity and to win over the people, Ven Hui Li carried out charity events and assisted the sick and poor by distributing clothing, food and medicine.

Known as the African Monk, Ven Hui Li has vowed to devote five lifetimes to develop and propagate Buddhism in Africa.

Born in Pintong county, Taiwan, in 1955 to poor farming parents, Ven Hui Li learned early that life is fragile. His school was located next to a cemetery and the frequent funeral processions left a deep impression on him.

In 1987, he became a student of Master Hsin Yun, the founder of the Fo Guang Shan Buddhist Order, and was ordained a monk a year later.

In 1992, to fulfil Master Hsin Yun’s vow to build a Fo Guang Shan temple on every continent, Ven Hui Li volunteered to go to South Africa to build the first Mahayana Buddhist temple on African soil.

He arrived in South Africa, a total stranger, and it took him weeks of travelling around and hardship to get a clearer view of the country. At one stage, he contracted malaria but he did not falter in his determination to serve Africa.

“If you don’t get malaria, you have not got your passport to work in Africa,” he quipped.

In 1994, the African Buddhist College (the first Buddhist seminary in Africa) opened at Nan Hua Temple in Bronkhorstspruit to teach Buddhist scriptures and practices to young men with the aim of helping them alleviate their problems through education.

When he visited Malawi in 1998 to make a donation of wheelchairs, Ven Hui Li became aware that 40% of the population was HIV-positive and over one million children had lost one or both parents to AIDS. He realised that there would be a whole generation of orphaned children, who, if they reached adulthood, would have no proper upbringing and very little education. Thus was born the concept of Amitofo Care Centres (ACC).

<< On a mission: Ven Hui Li and 30 of his young charges from the Amitofo Care Centre will be in Malaysia for the Spread The Seeds Of Love charity event.

Ven Hui Li abdicated the abbotship of Nan Hua Temple in 2001 to dedicate himself fully to his work in Africa, earning himself the reputation of being the Albert Schweitzer of Mahayana Buddhism.

Following successful negotiations with Malawi’s First Lady, the late Ethel Mutharika, a piece of land just outside Blantyre, in southern Malawi, was donated for his project.

Construction of the first ACC began in 2003. Generous donors, mainly from Taiwan, provided financial support. By 2005, the first stage of construction was completed and 120 children aged between three and 12 moved in. By 2008, the Malawi Care Centre was looking after nearly 300 orphans and children of single parents.

At present there is a preparatory school which is occupying one of the hostel blocks until a school for about 500 kids can be built. Next on the agenda is the building of a high school and a centre for vocational training. There is a clinic run by two care mothers, qualified nurses, and volunteers from abroad.

Kung fu is the special skill taught at the Blantyre Care Centre as a cultural exchange programme. About 100 children practise kung fu taught by masters from the Shaolin Temple in Henan, China, to instil discipline, tenacity and focus.

The children attend service every morning and receive Buddhist teachings.

The ACC also assists other community-based organisations in the surrounding district that support over 2,000 children and more than 1,500 adults.

ACC has branches in Harare (Zimbabwe), Nhlangano (Swaziland), Mafikeng (Lesotho) and Yaound (Cameroon). There are plans to set up centres in Zambia and Tanzania next.

ACC needs about US$12mil a year to achieve its goals.

Ven Hui Li and 30 children from the centre will be visiting Malaysia and Brunei on a charity tour entitled Spread The Seeds Of Love from Nov 28 to Dec 30.

The main organisers of the tour are Persatuan Anak-anak Yatim Eduwis Selangor, NSS Centre (a charity organisation in Ipoh) and Hai Tao Foundation. Entry to the performances is by invitation card.