Wise, irrepresssible, and a bit of a troublemaker

Melbourne, Australia -- SULAK Sivaraksa, who is in Melbourne for the Parliament of the World's Religions, says he is known by many labels in his home country of Thailand. 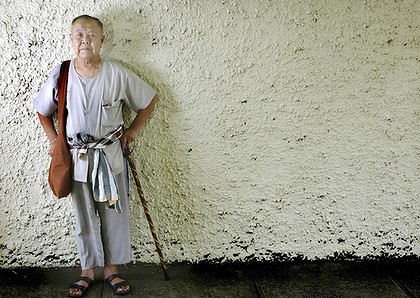 To some he is "the Siamese intellectual". "To the Thai Government," he says with some merriment, "I am the troublemaker."

Aged 77, Mr Sivaraksa faces three charges of defaming the Thai king, which carries a possible sentence of 45 years in prison. "I could spend my 120th birthday in jail," he says, again with some merriment.

Scottish Buddhist Stephen Bachelor has described Mr Sivaraksa as "an irrepressible campaigner for a sane and just society". Among those who have voiced support for his work are the Dalai Lama and Aung San Suu Kyi, the leader of the Burmese democracy movement.

According to Mr Bachelor, Mr Sivaraksa combines "the strength of a traditional Dharmic sensibility with the critical rigour of a Western-educated intellectual".

In 1953, Mr Sivaraksa went to London to study law and was admitted to the bar. ''Have you ever practised law?'' I asked. "Only to defend myself," he replied.

When he returned to Thailand, he lived for some time with "the poor". He was from a well-off family. If he wasn't well-off now, he says he would be in jail. He can afford to defend himself.

Mr Sivaraksa says "the poor" are made out to be stupid. The people he lived with had "great trust for one another and a knowledge of the natural world".

Around this time, Mr Sivaraksa said the king of Thailand was not a God-king. "How can he be?"

He is smiling again. "He is the one person in Thailand who must by law be a Buddhist. He is a man."

He says a lot of Westerners like Buddhism because there is no dogma and individuals can make their own inquiry. "They like it to meditate, to be calm, to be mindful. That is good - but not good enough." Beneath the mirth, Mr Sivaraksa has a hard edge to him.

To him, all questions of human behaviour start with the Buddha's first truth: Life is suffering. "It is not just personal suffering. There is social and environmental suffering.''

The Buddha's second truth is that suffering is caused by greed, hatred and illusions. "Greed manifests in capitalism and trans-national corporations. Hatred comes from militarism and imperialism."

He agrees that one of the problems with global warming is that many people's view of nature now comes from computer screens and television - not from nature. "We have to think globally - about general humanity, about Mother Earth, about nature.''

Last year, at the Frankfurt Book Fair, there was interest in his new book from countries around the world. This is the source of his optimism.