MIAMI, FL (USA) -- In the theatre of American public apologies, it's common for celebrities to invoke their faith. 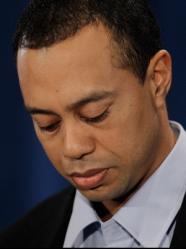 Disgraced golf superstar Tiger Woods did it Friday, in fact, with a twist. He cited the role of Buddhism in his life - and will look to it to help him recover from serial infidelity.

"People probably don't realize it, but I was raised a Buddhist, and I actively practiced my faith from childhood until I drifted away from it in recent years," Woods said during Friday's televised apology, his first public appearance in nearly three months.

It was Woods' most direct reference to his beliefs yet.

In a few previous interviews, Woods said he had practised mediation and had attended temple with his mother. He has credited her, and her Thai Buddhism, with giving him the focus needed on the golf course and throughout his life.

His latest comments reflected the Buddhist teachings about desire, craving and attachment - and balance.

"In therapy I've learned the importance of looking at my spiritual life and keeping in balance with my professional life," Woods said. "I need to regain my balance and be centred so I can save the things that are most important to me, my marriage and my children."

Religion often comes into play for public figures seeking redemption from scandal before the cameras. Bill Clinton invoked God when he asked for constituents' forgiveness, as did South Carolina Gov. Mark Sanford. But in this country, the religion in question is typically Christianity.

In January, Fox News analyst Brit Hume said Woods should turn to Jesus to deal with his sins. Woods' statement on his religion seemed to some as sort of a rebuke to the public debate stoked by Hume over Buddhism versus Christianity.

"He was reaffirming his own family's tradition," said Robert Thurman, a professor of Buddhist studies at Columbia University. "It was nice to see him standing his ground in the sense that Buddhism is a minority religion."

Buddhists look to themselves as they work to lead an ethical life. There is no one divinity who can bestow redemption as in Christianity.

"Buddhism offers the opportunity to be Buddha, if we do the work. It's already there, it's who we are," said Darren Littlejohn, a Buddhist and Portland, Ore.-based author of "The 12 Step Buddhist," a book about addiction recovery. He said Woods' comments reflected the Buddhist belief that "life is suffering. It's based on attachment, anger and desire."

Siddhartha Gautama, the Buddha, was born a wealthy prince 2,500 years ago. Upon realizing that suffering, sickness and death happen to every human being, the young prince vowed to seek enlightenment. Years of meditating taught the Buddha to realize that attachment, greed and desire are the root of all suffering, and that letting go of those things is the key to a peaceful life - and the path to ending the cycle of discomfort altogether.

Woods addressed this so called samsara - the Sanskrit word for the cycle of suffering - during his news conference.

"Buddhism teaches that a craving for things outside ourselves causes an unhappy and pointless search for security," he said. "It teaches me to stop following every impulse and to learn restraint. Obviously I lost track of what I was taught."

If Buddhists do violate certain precepts - killing, stealing and sexual misconduct among them - then they are subject to the law of karma.

"What people need to understand about karma is that it is based entirely on volitional action," said Charles Prebish, a Buddhist studies professor at Utah State. "If one chooses to do an act that is morally inappropriate, then one will reap the rewards. In Tiger Woods' case, one could say that some of those repercussions seem to be immediate. The negative karma that he accrued is starting to bear fruit."

Stephen Prothero, a Boston University religion professor and the author of "Religious Literacy: What Americans Need to Know," said Woods' statements showed an introspective look at his predicament and how his faith will help him assume responsibility to cure his sexual cravings.

"Buddhists believe there are various reasons why we suffer, and the main one Buddhists focus on is craving," Prothero said. "The endless desire for things is such an important teaching to Americans - if we just had that thing, that girl, that car, that house, we'd be satisfied. That would seem to affect celebrities even more."