SEOUL,  South Korea -- Ven. Pup Jeong, a South Korean Buddhist monk who preached the happiness of a life unbound by desire for possessions in a series of best-selling books, has died. He was 78. 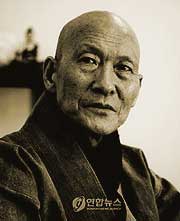 << "When you do not own anything, you actually own everything in the world." - The late Ven. Pub Jeong

The monk died at Gilsang temple in Seoul on Thursday after suffering from lung cancer since 2007, temple officials said.

"I am grateful to everybody. I will repent for the mistakes I made in this life ... Please use whatever belonged to me to help make a clean and good society," the monk was quoted as saying while dying. "It's time for me to abandon time and space."

Pup Jeong, whose secular name was Park Jae-cheol, became devout in his Buddhist faith in 1954 after graduating from college, which he attended amid the chaos of the 1950-53 Korean War. He was ordained in 1959, and became well-known after publishing a book titled "Non-possession" in 1976.

"Though we possess things out of necessity, we grow concerned because of them. Therefore, possessing something is in a way being bound by something," the monk wrote in the book. He later published a series of books on other Buddhist teachings.

His life was an example of non-possession. Despite his popularity, he never took high-profile positions in Buddhist society, living alone in remote places most of his life.

Temple officials said there will be no special funeral ceremony for him, according to his will. His body will be cremated at a temple in Seoul on Saturday, they said.

"Though respectable Ven. Pup Jeong left empty-handed as he was in his life, he left a lot of teachings behind for us," Lee said in a condolence message. "He demonstrated what benevolence is and what truth is through his own life."

Aides said Lee has been a big fan of the monk, reading his "Non-possession" over and over again and making sure to carry his books when traveling to foreign countries or going on holidays.

Ven. Pup Jeong  has inspired many Koreans through his thought-provoking, reflective work of essays.

In his famous book, titled "Non-Possession", he said when you do not own anything, you actually own everything in the world.

Over 3 million copies of the book have been sold since its initial publication in 1976.

The body of Venerable Pup Jeong will be moved to Songkwang temple in the city of Suncheon in South Jeolla province today.