Seoul, South Korea -- The Ven. Beopjeong, who passed away on March 11, 2010, did not seek the post of abbot at his Buddhist temple let alone a high-ranking position in the Jogye Order of Korean Buddhism, the largest of its kind in Korea. He was instead a great man who left a significant mark on Korean Buddhism. Though he lived a humble life in propagating the spirit of “non-possession,” he left a vast legacy to the Korean people. 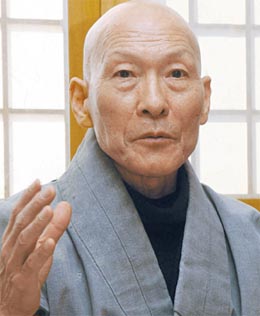 Beopjeong often said, “Having something is instead being shackled to it,” adding, “We should learn to be satisfied with having little and small things.” He shared vegetables he raised with neighbors and the royalties from his books with the poor. In his will, he asked that his sarira not be preserved and for his body to be cremated while wearing his monk’s robe. Departing this life, he has also lived up to his philosophy of non-possession. What he meant was not that people should have nothing, but to free themselves from useless greed.

The monk pursued an unworldly life, staying at a hermitage behind Songgwang Temple near Suncheon, South Jeolla Province, for 17 years and in a remote mountain in Gangwon Province village without electricity for another 17 years. Yet he steadily communicated with Buddhists.

At Kilsang Temple in northern Seoul, he held a massive Buddhist service every spring and fall. He published dozens of essays, collections of Buddhist writings, and translations of Buddhist canon. They include “Non-possession,” “To Leave After Giving Up,” “Only One Chance in Life,” and “Beautiful Finish.” His essay series “Flowers Blossom on Mountains” was published by The Dong-A Ilbo for five years and seven months from April 1993.

He practiced asceticism by writing and holding Buddhist services. Beopjeong was a genuine believer who calmly propagated the Buddha’s teachings and greatly helped the popularization of Buddhism in Korea.

He also devoted himself to religious harmony. He invited the late Cardinal Stephen Kim Sou-hwan to the opening service of Kilsang Temple, wrote a piece for a Catholic newspaper to celebrate Christmas, and lectured at Myongdong Cathedral in Seoul. He also maintained friendly relations with Protestant and Won Buddhist organizations. “The greatest religion is not Buddhism, Christianity, Judaism or Islam but kindness,” he said, referring to kindness as embodying mercy. Indeed, another of the monk’s major gifts to Korea was enhancement of religious reconciliation and communication.

“A beautiful finish is to get closer to emptying oneself by breaking the pursuit of filling up and to fulfill our duties and responsibilities at our places,” he said. Though he is gone, the spirit Beopjeong left will be a constant source of contemplation and inspiration for Koreans.