Taipei, Taiwan -- Dharma Master Cheng Yen may be a 72-year-old Buddhist nun adhering to a harsh daily regimen in a convent with 160 other nuns, but that doesn't mean she's missing out on the latest technology. 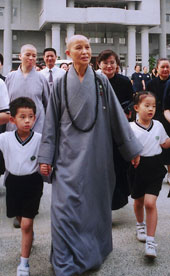 Wherever she goes in her small temple abode in eastern Taiwan or in the sprawling office complex she oversees nearby, television screens are close by, including two where morning service is held. She presides over a daily videoconference and, from the computer on her desk, holds emergency meetings via Webcam and tv. In the early 1990s she was quick to get an e-mail address and start surfing the Web.

Cheng Yen is the founder and chief executive of a fast-growing charity, Taiwan Buddhist Tzu Chi Foundation, the largest noNGOvernmental organization in the Chinese world. Thanks to being so wired, she heard about the Haiti earthquake in January right after it hit. She immediately began coordinating a global fund-raising drive and dispatching relief.

Often compared with Mother Teresa, Cheng Yen and five others started Tzu Chi in 1966 when they began sewing baby shoes to raise money for the poor. Begun in a wooden hut not far from its headquarters today, Tzu Chi now enlists entrepreneurs and other lay people as volunteers and organizes itself like a corporation. The number of donors hit 1 million in 1989, the same year that Cheng Yen published her first collection of philosophical musings, Jing Si Aphorisms. But its grassroots activity really caught the public's attention after the foreign press started criticizing Taiwan as an island of greed during a stock market bubble in 1990. The book is now available in 11 languages and has sold 3.5 million copies, and Tzu Chi's donors number 10 million.

Cheng Yen never travels outside of Taiwan because she suffers from heart disease. But this doesn't prevent her from taking Tzu Chi to faraway places; it has branches in 47 other countries, the largest number being in the U.S., where it has 99 field offices. Some 30% of its donors live outside of Taiwan, with the largest group--330,000--in Malaysia. Last year it raised $313 million in Taiwan and at least $30 million overseas; there's no overall total because Tzu Chi doesn't tally what all the branches collect. The branches are self-sustaining and seek funding from the headquarters only when necessary.

The organization is a model of efficiency: Its staff numbers just 800, bolstered by its network of 2 million volunteers, up from 30,000 only 17 years ago. By comparison, the Red Cross has fewer than 1 million volunteers, but it pays 34,000 employees. Bangladesh's BRAC, the world's largest NGO by number of staff, employs more than 120,000.

Since its first overseas mission in 1991 after a flood in Bangladesh, Tzu Chi's medical and relief teams have been active in 70 countries, their signature blue shirts and white trousers visible in such far-flung places as Kosovo, Rwanda, Cambodia and North Korea. In North Korea, for many years after 1998, Tzu Chi was the only NGO allowed to hand-deliver goods to recipients, not merely drop off the supplies at harbors as other international NGOs had to do.

In 2003 Tzu Chi became Taiwan's first NGO included under the UN's umbrella, giving it protection in hot spots such as Afghanistan, and in 2008 it was the first offshore NGO allowed to register in China. In January Beijing ruled that its name, Tzu Chi (meaning "compassionate relief"), was worthy of copyright protection against a local copycat. "The best way to look at Tzu Chi from a management point of view is how its efficiency and brand name value continue to pull in volunteers and outside donations," says Stan Shih, a cofounder of Acer. "Cheng Yen is no doubt one of the world's best CEOs."

Shih met Cheng Yen in the 1990s through another Acer cofounder, Ken Tai, a Tzu Chi volunteer, and went on to attend a Tzu Chi summer camp held for businesspeople contributing $30,000 or more. Shih is working with Tzu Chi and other organizations to promote computer literacy as part of a pan-Asia effort.

Chief executives are famous for their long hours, but Cheng Yen--who declined to talk to FORBES ASIA for this story--takes this to an extreme. Her office hours begin at 3:45 a.m. and end past 10 p.m. Her schedule is filled months ahead with visits from donors, volunteers, people asking for help and politicians, interrupted only by meals that last no longer than 15 minutes. Frugal to the point of hardship, she is known for using no more than one basin of water a day. A couple of times a year she travels around the island to visit volunteers and deliver speeches. A forceful speaker, she prods housewives to save part of their grocery money to help the poor with medical expenses, and she converts big-name business leaders into devout disciples.

An early disciple was Wei Yin-Chun, one of the four founding brothers of Tingyi Holdings. In 1988, four years before the brothers moved to China to found what later would become the largest instant-noodle maker there, Wei, then 31, was deeply touched by stories in a Tzu Chi publication and contacted its local office to make a donation. In 1995 he started working with Tzu Chi in China, doling out relief and building schools in remote villages. After completing a two-year apprenticeship, Wei became a disciple and now heads the food unit of Tzu Chi's international aid arm. When disaster strikes, he puts aside work at the family business to focus on relief efforts, as he did in January for Haiti while on business in China. Now back in Taiwan at the helm of a family subsidiary, Wei Chuan Food, Wei set up a unit in 2008 inside the company to offer courses for the group's 5,000 employees.

Relentless and inspiring as Cheng Yen is, it's her ability to deliver results while converting the philosophical thought of Buddhism into plain language and applying it to daily life that win her wide admiration. "She talks in a way that makes things sound so simple that you can understand," says Franky Widjaja, son of Eka Tjipta Widjaja, founder of Indonesia's Sinar Mas Group. "There's nothing mystical about what she says."

The father, a Christian, and his son visited Cheng Yen for the first time just days before riots broke out in Indonesia in 1998 in the aftermath of the financial crisis. After returning, the Widjajas jumped into action, distributing food, toothpaste, instant noodles and other daily necessities to victims and the army during the riots. They also worked with Tzu Chi to clean up Jakarta's notoriously polluted Angke River after disastrous flooding in 2002 and to raise $30 million to resettle victims of the 2004 tsunami. With the help of volunteers such as the Widjajas, Tzu Chi arrived in Banda Aceh, capital of the area devastated by the tsunami, one day ahead of Indonesia's president, several ministers and the army.

Such grassroots mobilization is meshed with a consensus-driven decision-making structure at headquarters. Cheng Yen intervenes in contentious issues, such as in the decision to help China resettle millions of victims of the 1991 mass flooding in eastern China, even though politics stood in the way on both sides of the Taiwan Strait. It was Taiwan's first relief effort in China--the Chinese government was suspicious of Tzu Chi's motives, and some Taiwanese weren't happy that Tzu Chi was helping mainlanders instead of focusing on domestic relief. "She can combine her charisma with the management of a modern organization," says C. Julia Huang, an anthropology professor at National Tsing Hua University and author of a new book on Tzu Chi. "That makes Tzu Chi an interesting case study of a nonprofit organization, different from most other Buddhist groups." Many Buddhist groups have trouble growing beyond their roots as a religious organization, she says.

Mixing her idealism with perseverance, Cheng Yen often commits herself to a project before raising the money. Despite worries about funding, she overruled skeptics and agreed to the requests of every school headmaster who knocked at Tzu Chi's door asking for money to rebuild after an earthquake flattened a slice of central Taiwan in 1999. Tzu Chi raised $300 million to build 51 schools, all shock-resistant structures. After eight years of trying, she built her first hospital in 1986 by collecting small donations and bypassing big donors. "Do not leave trouble to our offspring," she told her disciples when explaining why she declined an offer from a Japanese donor to underwrite the whole hospital project. She worried that relying on a single donor would jeopardize Tzu Chi's independence if the donor demanded a bigger say in its operation.

After six more hospitals came the establishment of a full-fledged university and a medical college, all in Taiwan, and a media group that includes a 24-hour global satellite TV station carrying in-house productions of news, dramas, talk shows and documentaries, as well as Cheng Yen's speeches and notices of charity activities posted by its global offices from as far as Lesotho. The media group draws a quarter of its annual budget from a metal, plastic and paper recycling business in Taiwan staffed by 60,000 volunteers.

Today Tzu Chi also runs Asia's largest bone-marrow registry, and its reserve of emergency medical supplies, enough to treat 30,000 patients for a month, rivals that of leading medical missions. "Tzu Chi's biggest asset is the master, the second asset is the volunteers, the third is the capital and experience of its entrepreneurs," says Walter Huang, chairman of Texma International, a garmentmaker for U.S. brands such as J.C. Penney, gap and Tommy Hilfiger. Huang is among the five founding donors and managers of a nonprofit textile business under Tzu Chi using fabric made from recycled plastic bottles to sew blankets for refugees around the world.

No apparent successor has emerged from Tzu Chi's four deputies, all professional managers, or from the nuns. "We and the master always focus on now," says Gary K.C. Ho, a real estate brokerage entrepreneur who heads the Canada branch. "Master hopes to finish everything while she is still alive, so everything will be in place when we have a successor, who might be less charismatic but would feel less pressured." But running against a clock that she has meticulously divided into 86,400 seconds a day, Cheng Yen has always said there's no retirement for her.

1. Do not kill
2. Do not steal
3. Do not fornicate
4. Do not lie
5. Do not drink alcohol
6. Do not smoke, use drugs or chew betel nuts
7. Do not gamble or speculate
8. Respect your parents and be moderate in speech and attitude
9. Follow the traffic regulations
10. Do not participate in politics or demonstrations