The journey of a brave bhikkuni

by Kumudini Hettiarachchi and Dhananjani Silva, Sunday Times, May 23, 2010

At the age of 19, Karma Lekshe Tsomo set out from America to pursue her dream of becoming a Buddhist nun. This is her story.

Colombo, Sri Lanka -- Gentle and soft-spoken Karma Lekshe Tsomo is a Professor by day but the “passion” of her life has been working towards linking Buddhist women around the world for mutual benefit and inspiration. 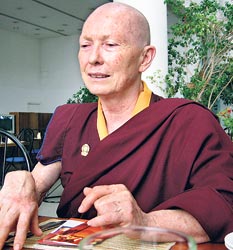 Bhikkhuni Lekshe has been making many a trip outside her homeland, America, as an “activist” not using the weapon of violence and harsh verbal barrages but her own humble manner to point out the “great need” for more bhikkhunis.

“Where are the Mother Theresas of the Buddhist world?” asks this Associate Professor who is attached to the Department of Theology and Religious Studies, University of San Diego, who was in Sri Lanka recently to address a series of meetings, pointing out that the first Bhikkhuni who chose to follow in the footsteps of the Buddha was none other than His own step-mother Maha Pajapati.

Explaining that the Buddha spoke about the four portals on which Buddhist society stands, she says they are the bhikkhus, the bhikkhunis, the upasakas and the upasikas.

“As such Sri Lanka, like all Theravada Buddhist countries, was an incomplete Buddhist society like a table with three legs which can easily tilt over, until recently because it had no bhikkhunis,” says Bhikkhuni Lekshe stressing that societies sans bhikkhunis are in jeopardy.

Recalling the long and arduous struggle that finally saw the issue of bhikkhuni ordination coming to the fore, she goes back to 1987 when the first International Conference on Buddhist Women inaugurated by the Dalai Lama himself amidst a massive gathering of 1,500, was held in Buddhagaya.

Those who attended it were not limited to Asia where Buddhism is predominant but also came from the US, Germany and other western countries.

The largest contingent of 16 was from Sri Lanka led by the Minister of Buddhist Affairs, it is learnt, with the week-long conference, drawing nearly 200 daily, being spent in meditation, getting to know each other and discussing in-depth issues faced by Buddhist women including the situation of Buddhist nuns.

At that time, the handful of bhikkhunis was not only illiterate but also homeless and hungry, says Bhikkhuni Lekshe. “They needed some help.”

The conference was “groundbreaking”, according to her as it was not only the first time in history that such a large number of Buddhists had got together, it was also the first time that a ‘Bhikkhuni Pattimoka’ was read.

This reading of the rules that bhikkhunis should observe in monastic life was done after more than a thousand years, she says, adding that the rules were read in English.

And the rules, in addition to such tenets as not to kill, not to steal, not to lie, not to have sexual relations, also focused on what should guide daily life in a monastery such as showing respect to others and good manners.

However, the most crucial issue that emerged from the conference was the need for education for Buddhist nuns. Many of the women who had devoted their lives to Buddhism in many countries couldn’t even read the suttras. Education was needed to propel them to take a leadership role, she says.
The conference, at the same time, perturbed Tibetan monks and Bhikkhuni Lekshe had to keep telling them that they were not competing with monks or seeking prestige but were only looking for opportunities for education and ordination.

Coming from a strict Baptist family, her parents were in shock when she told them of her yearning. She too faced a dilemma because she just could not find a monastery to get ordained. Raised in California, she went to Japan, spent two years there and then journeyed to India and a few other countries but “still couldn’t find a place to get ordained”. It was only in 1977 at the age of 32 that she finally found fulfilment and became a nun in Tibet.

She believes that monks are afraid of giving bhikkhunis their due place fearing that they would get fewer donations. “But this has been proved wrong, for where there are both bhikkhus and bhikkhunis the dharma is flourishing,” she says, dispelling the myth that being born a woman is bad karma or lower rebirth.

The good effects of the first gathering spread......they met regularly thereafter in Thailand in 1991 and Sri Lanka in 1993, improving education opportunities for Buddhist women. The last one had been in Vietnam and the next is to be in Singapore.

That first conference also saw the formation of ‘Sakhyadita’ or ‘Daughters of the Buddha’, the International Association of Buddhist Women, the Sanghamitta Institute, a centre for women’s awakening and the Jamyang Foundation to change perceptions of women’s potential, all under the guidance and leadership of Bhikkhuni Lekshe.

Sakhyadita, an alliance of women and men seeks to unite Buddhist women of diverse countries and traditions, promote their welfare and facilitate their work for the benefit of humanity.

Ordination of women, however, was another matter as it was controversial. One argument was that it was impossible to establish a bhikkhuni sangha in Sri Lanka as there were no bhikkhunis, with many unaware that there were bhikkhunis around the world. Another argument was that those in other countries were Mahayana bhikkhunis and Theravada had no such tradition, she says, explaining that vinaya or monastic discipline is not limited to either Mahayana or Theravada. It may be called different names in different countries but it means the same thing and that is vinaya.

Referring to the belief that the bhikkhuni sangha died out after a few hundred years following its establishment, Bhikkhuni Lekshe says emphatically, “It is not true.” They remained in India up to the 11th century and there are stone inscriptions both in Sri Lanka and India as proof of this, says this academic and author of several widely circulated books.

Since Buddhagaya, Sri Lanka has come a long way, with the women participants getting active back home and requesting the government for educational opportunities. “With the support of the government, capacity building and empowerment programmes have increased to equip them to work for society,” she says, adding that training centres have been set up for them including one by her own organization, Sakyaditha, in Moratuwa.

Bhikkhuni Lekshe says about 60,000 bhikkhunis around the world are engaged in “wonderful work” such as running schools, kindergartens, orphanages, women’s shelters, old folks’ homes and also publishing Buddhist work. As they don’t have families they are “free agents” and have time to work for society.

Buddhist nuns, especially in Asia where 99% of the Buddhist women live, can do many things monks cannot, she says, citing the example of counselling women. If a Buddhist woman has a problem, she cannot open her heart to a monk but can certainly do so to a nun, she adds.