Petaling Jaya, Malaysia -- The teaching thrones of Buddhism are shape-shifting and taking on new, dynamic forms to bring the Dharma to the world. Who said a throne has to even be something physical, in a temple? Couldn’t it also take the more intangible forms of HTML code and hyperlinks? 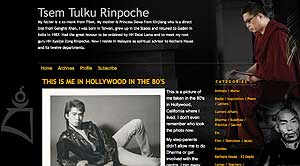 Tsem Tulku Rinpoche, the Spiritual Guide of the Kechara Buddhist Organisation in Kuala Lumpur, Malaysia, is showing the (cyber)world a new method teaching through interactive, social platforms such as Twitter, Facebook and, most specially, a personal blog. Unconventional, some might say, and not quite the “proper way” of passing down the teachings. Sceptics may argue that the true essence of the Buddha’s words may become watered down, misinterpreted or lost within this whole new jumbled language of the web.

This isn’t true though. In a world that is getting closer, smaller and faster, immediacy and that slightly voyeur-ish instinct to get up close and personal makes blogging, “tweeting” and Facebook-ing a fast and sure way for bringing Dharma into others’ lives.

Tsem Rinpoche writes his blogs, posts pictures, tweets and updates his Facebook personally, almost on a daily basis. He shares personal stories from his difficult childhood, photographs of his erudite Lamas of the monasteries, news from his Dharma centre, inspiring videos from YouTube and an intimate behind-the-scenes look at the students and life in his Dharma centre.

In between, there are plenty of Dharma teachings, advice and wisdom – all of them topics that the reader can take as personal contemplation and learning. For example, in an article about feeding the homeless with Kechara Soup Kitchen, he writes, “Life is not for wasting in self-indulgence as it can be used to serve others. It doesn't matter what religion you are if you are hungry and it doesn't matter what religion I am who gives you the food. What matters is that we care about others and help each other, try to help and share our good fortune with others.”

In between blog posts about his individual students’ Dharma work and practice, updates about rescuing abandoned animals, funny photos of his students’ antics, moving personal anecdotes and beautiful, rare, Buddha images Tsem Rinpoche also shares profound teachings on compassion, impermanence, suffering of beings, retreat and practice; he even touches upon that tricky subject Emptiness, but in a very relatable way.

“Nothing is owned by us,” he shares in a post entitled ‘We own nothing…’ “Everything will be given, taken, lost, abandoned or forgotten in the end. We came into our current lifetimes with nothing and no matter how much we accumulate, we leave with nothing. So wouldn't it be wise that in between, we develop no real attachments or put so much emphasis on the material?”

Tsem Rinpoche also “tweets” using Twitter, an online social networking where users share short updates with friends who “follow” them. Tsem Rinpoche now has over 2300 followers who not only “follow” his tweets but engage directly with him via the direct messaging service. As can be seen on his main Twitter page, his tweets are not just updates or musings but also direct teachings and advice given to individuals who pose him questions.

Rinpoche shares little snippets of advice through the tweets: “If the limits we put on ourselves are real, then there could be no Enlightenment”; he “retweets” the good advice shared by his other online friends: “RT @DavidWeedmark: Always do what you are afraid to do. ~ Emerson”; he also uses Twitter as a way of sharing information, videos, even online petitions posted up by his other Twitter followers. Cleverly, all blog posts he writes are also shared on Twitter so the teachings reach far and very widely. It is certainly a most immediate way of reaching out, at a time when the world has become increasingly fast and abbreviated.

From these initial tweets and questions, Tsem Rinpoche connects to people from all over the world and puts them in touch with the global online Dharma community of his students. This in turn provides them much needed support for their practice, albeit in a virtual way. From the letters page and guestbook of Tsem Rinpoche’s personal website, we learn that these initial online connections lead to Rinpoche sending them Dharma gifts of books and items with which to start their own altars and practice, and recommending them personal practices.

An entirely new type of Sangha is opening up through these new avenues of imparting Dharma and they are engaging with the teachings in a direct and spontaneous way. It may not be the temple grounds and caves of old where retreats were isolated and quiet; but for many, their computers have become their most regularly visited place, a quiet space that they discover knowledge and find solace. Tsem Rinpoche taps into these new “caves”, bringing the enlightened energy of the teachings to every corner of the globe. Nowadays, all you need is a computer and a keyboard to begin your practice. After all, Dharma can begin and continue anywhere, doesn’t it?

Start “following” H.E. Tsem Tulku Rinpoche for your dose of daily web wisdom on Twitter: twitter.com/tsemtulku and share in his personal writings and teachings on his blog: blog.tsemtulku.com.