Dharamsala, India -- Barcelona and Spain defender Carles "Tarzan" Puyol who scored the only goal of the semi final against Germany to send his country into the first ever world cup final has a keen interest in Buddhism, according to his friend Ven. Thupten Wangchen of the Casa del Tibet, Barcelona. 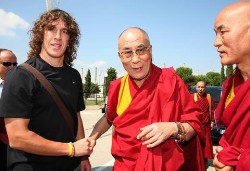 << Puyol, seen here with His Holiness the Dalai Lama in Barcelona, Spain, 2007. Also seen on the right is Ven. Thupten Wangchen.

Ven Wangchen told VOA that Puyol's interest in Tibetan culture and Buddhism started after reading Sogyal Rinpoche’s book, The Tibetan Book of Living and Dying which helped him deal with death of a family member. Puyol, Ven. Wangchen said, has a Tibetan tattoo on his left arm which reads “Power is inside the Mind. The strong can endure.”

Puyol, also an admirer of the Tibetan leader has met His Holiness the Dalai Lama during the latter's visit to Barcelona in 2007. Ven. Wangchen said Puyol has also expressed his interest in helping the Tibetan national football team in the future.

Puyol made his senior national-team debut in November 2000, shortly after playing his part in the Olympic squad which picked up silver at the Games in Sydney. Since then his name has been a constant in the Spain squad list, including appearances at two FIFA World Cups and two UEFA EUROs. Indeed, Puyol's tigerish defending was another key factor in La Roja's long-awaited success at the Euro 2008.