Hyogo, Japan -- Shinno Yamasoba, 58, is the vice head priest at Daijyoji Temple in Hyogo Prefecture's Kami town. Founded in 745, Daijyoji is nestled between peaceful rice fields and sheltered by layers of mountains. 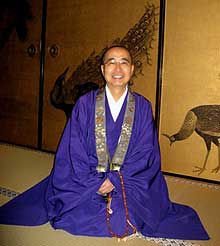 The closest city is Kyoto, about three hours away by local train. Still, visitors often make the journey to Daijyoji to see its exquisite Buddhist paintings, 165 of which are designated Important Cultural Properties of Japan.

The main temple was built at the end of the 18th century as a collaboration between Mitsuzo (1716-1786), the head priest of Daijyoji, local carpenters and one of Japan's greatest painters Maruyama Ohkyo (1733-1795).

Designed to be harmonious with the surrounding gardens and mountains, the temple's walls are made of fusuma sliding doors, painted on both sides with birds, monkeys, trees and flowers.

Depending on which of the 165 sliding doors are opened or closed, the rooms and interconnecting spaces offer different views that metamorphose from naturally beautiful to breathtaking. An almost endless number of views can be revealed. Recently, however, this picture of pure harmony has been disrupted, breaking the heart of priest Yamasoba.

To protect Ohkyo's 45 masterpieces, they have been stored in a concrete warehouse next door and, using the latest digital technology, replicas of the works were created for the temple. Yamasoba has no problem with replicas being used, but he doesn't understand how the copies have ended up so different from the originals.

More characters and longer words don't mean more meaning. When Japanese Buddhists die, they receive a kaimy o (heavenly name) for their next life. Each kanji expresses something about the deceased's life and the more characters we put together, the more it costs. Many people believe that the longer the name, the better it is and the happier the person will be in his or her next life. It's not true! That's like thinking that a bigger house will make one feel better. Or that the more one talks the smarter he or she is.

We'll know if the road was correct when we arrive. That's how we Buddhists think. But since a monk's road is never straight, the trip is always fun. It really doesn't matter where I'm going.

Our bodies need fuel but it is our minds that need nourishment. Shojin ryoori is the traditional Japanese vegetarian cuisine at Zen temples. Monks in training eat only this type of food to cleanse their mind and heart. Actually most young men want to eat meat but they get konnyaku steak (jelly-like food made from yams) instead. We also don't eat any vegetables that have a strong odor, such as scallions, garlic and the like. This cleansing process takes 100 days, but for Zen monks it takes three years. During training our diet is so low in calories that we feel physically weakened, but mentally we get sharper every day.

Ceremonies help the healing process. In Buddhism, we have many rituals to remember the deceased. After the death of a loved one, his or her relatives and friends go to the temple to pray every seven days until the 49th day, which is when he or she is reborn. There are countless more events in the first year and many more later on. After three, seven, 13, 17, 25, and 33 years, we have major ceremonies. Also, a few times each year relatives gather at the temple for prayers and a feast. All these events are chances to share memories of the deceased and to help everyone heal and move on.

Kids are smart: If there's a way to skip school, they will find it. In Japan, many children quit going to school simply because they can. Parents and teachers appear to easily accept this kind of behavior. Any excuse, real or imagined, works — bullying is a good one, because nobody can really check if it is true. This means many kids of high school age are at home, playing games at night and sleeping all day. After a while, parents ask for our help to get those young adults out of the house and working. Maybe we need to accept the fact that not everyone needs or wants a formal education.

Technology should not be blamed for human error. Japanese digital technology is so advanced that it's possible to make perfect replicas of things. Our replicas, however, turned into cheap-looking copies because we made the mistake of hiring an art director to guide the technology team. This director manipulated the images to recreate what he thought the paintings might have looked like 200 years ago. He used more gold leaf and brightened the colors. His added touches destroyed Ohkyo's original strokes. Luckily, at certain times each year visitors can see the originals on show.

The best and worst part of Japanese culture is the concept of shikataganai. This means that we accept reality as is and we don't blame anyone. If we feel frustrated, we blame ourselves, because ultimately everything that happens to us is our own doing, our own fault. For example, even though the replicas are not what the originals look like and not what we wanted, we still paid the full price — 0 million — and accepted the outcome. It's all over and done with, so there's no point in crying over spilled milk. That's shikataganai.

I'm not a real monk yet because it's hard for me to accept everything and forgive everyone. I'm still a deshi, a young man in training. My wife's the best monk. She's the most enlightened being I know.

Life is dark and filled with hardship, so people need religion. Everyone experiences tragedy at some point, and at that moment, the power of religion becomes apparent. It was the same for us, too. Our second child was born sick, and we were told that she would die in one week. We cried so hard and wondered why such a tragedy had to happen to our family. Buddhism helped us a lot. Back then, we prayed a lot together. We still do.

The happiest place to be is in the position to help others. If I didn't study Buddhism, I wouldn't have drawers of knowledge to open and share with others.