Stephen Batchelor's new book on Buddhism provokes and challenges even as it stirs up an old debate.

New Delhi, India -- What Stephen Batchelor says about what the Buddha actually taught — whether you end up embracing it or not — is undeniably startling, beautiful and visionary: Gotama, he tells us, spoke of the middle way as “an ancient path travelled upon by people in the past…On following it he came upon the ruins of a city with parks, ponds, groves, ramparts, a delightful place. 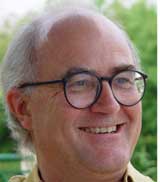 << The insights that Batchelor offers us as he travels deeper into the Pali texts are brilliant, dazzling, and full of piercing clarity.Photo: courtesy www.stephenbatchelor.org

He tells the king to renovate the city so it would become successful, prosperous and filled with people once again…Gotama did not say the path led to nirvana but to the restoration of a city — his teaching, the Dhamma — as a template for a civilization.”

Buddhism, Batchelor affirms, is “not a creedal religion but a broad culture of awakening.” His new book, Confession of a Buddhist Atheist, has stirred up an old debate, dividing Buddhist circles: That the true heart of the Buddha's teaching is non-theistic, non-religious; a secular, not mystical practice. This emphasis — that the Buddha did not found a religion — is not new, but Batchelor is one of contemporary Buddhism's most respected and widely read writers and his reading that the Buddha's enlightenment “involved a radical shift of perspective than the gaining of privileged knowledge into some higher truth” has provoked, challenged (and delighted) practising Buddhists in a way that other agnostic writings on Buddhism has not.

The book tells the story of a 37-year journey through the Buddhist tradition. It begins with his encounter in India at the age of 19 with the Dalai Lama and the teachings of Tibetan Buddhism, and concludes with the reflections of a 56-year-old secular lay Buddhist living in rural France. After decades of being steeped in Tibetan Buddhism and Zen, he increasingly felt at odds with doctrines, theologies, religious orders and gurus. For 10 years he was a bhikkhu; he then disrobed, married and became an itinerant teacher, going where he is called. His commitment now is to a life that embodies “Buddhist values within the context of secularism and modernity.”

He is now drawn to Buddhism “not because it has a more convincing explanation of the nature of reality than other religions, but that it offers a methodology which might actually work in addressing the question of suffering.” Buddha's Four Noble Truths are “true not because they correspond to something real somewhere, but because, when put into practice, they can enhance the quality of your life.” Using the core teachings of Gotama, he engages with the world now “from the perspective of detachment, love and lucidity.” Batchelor began a fresh and close examination of the Pali canon, especially the ‘Kalama Sutta', for clues to what the Buddha had actually said.

Gotama seems to have only spoken of waking up to a contingent ground, not a withdrawal to “a timeless mystical now but an unflinching encounter with the contingent world as it unravels moment to moment.” Batchelor, attentive as ever, is sharply aware that his is a personal reading. “I have to be alert to the tendency to project onto Gotama my own preferences and values,” he notes. “Every Buddhist through history has constructed his or her own Gotama. I cannot claim it is more truer or correct than yours. All I can say is that the material buried in the Pali Canon and elsewhere has not yet exhausted their capacity to generate more stories about Gotama and what he taught.”

The insights that Batchelor offers us as he travels deeper into the Pali texts are brilliant, dazzling, and full of piercing clarity. I have always admired his prose (“Verses from The Centre”; “Living with the Devil”)), and his new work abounds in rich insights and magnificent, clear writing. The metaphors Buddha used, says Batchelor, “seem to encourage a creation of a self than a renunciation of a self, rather than present the self as a fiction, Gotama presented it as a project to be realised – the functional, moral self that breathes and acts in the world…This is a useful way of looking at the self for a lay Buddhist person who works in the world than a renunciation model.”

Elsewhere, he writes that “Awakening is not primarily a cognitive act; it is an existential re-adjustment…a refined engagement with a shifting, complex world…it springs from a quiet, but curious intelligence. And it is empathetic, keenly sensitized to the peculiar texture of one's own and other's suffering.” The Buddha suggested that “you turn your life to that which is very far from God: the pain and anguish of life on earth; to embrace the contingency of one's life is to embrace one's fate as an ephemeral but sentient being.”

And this becomes the ground for unsentimental compassion and love. “As a way of life the middle path is an ongoing task of responsiveness and risk, grounded in a groundless ground. Its twists and turns are as turbulent and unpredictable as life itself.”

The challenge of Gotama's eight-fold path as he sees it “is to live in this world in a way that allows every aspect of one's existence to flourish: seeing, thinking, speaking, acting, working etc. Each area of life calls for a specific way of practising the Dhamma…I think of myself as a secular Buddhist who is concerned entirely with the demands of this age (given the task of responding to the suffering that confronts me) no matter how inadequate and insignificant my responses to these demands might be. And if in the end there does turn out to be a heaven or nirvana somewhere else, I can see no better way to prepare for it.”