Luang Prabang, Laos --  Mick Jagger took some time far out of the spotlight with a recent trip to Luang Prabang, Laos. According to a new report from Britain's The Sun, the Rolling Stones legend sequestered himself in a hotel for a period of deep meditation. 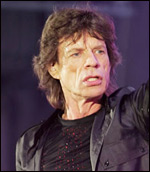 "Mick booked two rooms in the hotel - one for himself, the other for his luggage," a source close to the singer told The Sun. "His room boasts the best view overlooking the mountains and Phousi Temple. But he then blacked out all the windows, even though the hotel is in a remote location and away from prying eyes. He clearly wanted to be at one with himself."

The source adds: "Mick used the trip to regenerate himself. He spent hours with monks in the temples and chanted with them. He practices Buddhism and meditation every day. He says it's the first thing he does when he gets up in the morning."

In the meantime, rumors continue to circulate that the Stones are planning their farewell tour. In a recent interview with Le Parisien, drummer Charlie Watts says the band will hit the road as soon as Mick and Keith Richards are up for it.

"We will resume playing whenever Mick and Keith get bored. At the moment, they're having a good time," Watts said.