Savannah, GA (USA) -- The Rev. Teijo Munnich has been called "relentless" when it comes to her style of meditation. That's because, she said, most of her Zen Buddhist forbearers have been men. 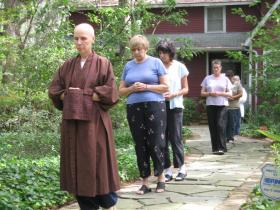 << The Rev. Teijo Munnich leads a walking meditation at a 2008 workshop. Behind her are Lynn Platt, Marcia Berens, Jan Howard, Deborah Robinson and Susan Lamb.

"I think it's been developed in a very macho way," said Munnich about the Zen Buddhist style of meditation. "One of the things about zen is it was developed in Japan by men from the very beginning. Women haven't had a lot of access to it, although certainly, women are given lip service."

The Asheville, N.C., Zen Buddhist priest brings her interpretation of meditation to Savannah in a retreat Oct. 15-16.

Isle of Hope resident Elizabeth Stewart has organized the event the past 10 years with fellow zen practitioner Susan Lamb.

The friends aren't part of an organization or congregation. They're just people who use meditation to find clarity and focus.

But the daily discipline can be difficult.

"It's a practice that easily gets swallowed up by life," Lamb said. "There's something about really committing yourself to a day and an evening that reminds you why you do it and why you want to keep it up in your daily life."

The two-day workshop taking place in Stewart's Isle of Hope home is open to both novice and experienced practitioners of meditation who register by calling or e-mailing Lamb.

Munnich plans to discuss Zen Buddhism and the spiritual benefits of meditation.

Zen is one of many different traditions within Buddhism. Generally, all study the 2,500-year-old teachings of the Buddha and use varying forms of meditative practices.

Zen Buddhism emphasizes "zazen," or sitting meditation, as a way of expressing the individual's true nature, also known as "enlightenment."

Savannah has become one of Munnich's stops in the Southeast region where she offers occasional weekend workshops or retreats.

Munnich serves as the abbess of Great Tree Zen Temple, a residential facility in Asheville, N.C., that offers workshops and retreats for all levels of experience.

In workshops for children, Munnich teaches young kids how to sit relaxed, cross-legged on a cushion with an upright posture and breathing deeply through their nose.

Adults often ask, "But what am I supposed to be thinking about?" Munnich said.

Many who practice Buddhism consider it not as much a religion, but a spiritual exercise and discipline.

Munnich, for example, still considers herself a Catholic.

From the age of 5, Munnich had intended to become a Catholic nun. She followed her dream all the way into a convent.

But she didn't stay.

"I had been such a devout and rigid Catholic in my heart," she said. "After leaving the convent, the whole thing just fell apart in my head, and I started exploring other things and stopped practicing Catholicism for seven or eight years."

During that break, she turned to the structure and calm she found in the meditation she practiced in the convent. She studied under Dainin Katagiri Roshi, the first abbot of the Minnesota Zen Meditation Center in Minneapolis.

Munnich moved to Asheville in the mid-1990s and created the temple based on her training.

One of her plans for the temple has been to involve more women in meditation. The intention isn't about representation as much as it is a search for spiritual balance.

"The way I want to approach it is by putting women together, doing zazen and seeing what happens," she said.

It started to work. Munnich was pleased to see more women meditating at the facility than she had known in the past. But she was also surprised by some of their criticisms.

"People who were really being honest with me would say, 'You know, there is something very heavy-handed about this. You're not really like this, but you're being so relentless,' " Munnich said.

"I realized that was the way I had been trained. That was the nature of the practice, and it was attracting women who were very tough and were able to just fit in to that."

Munnich said she hasn't reached conclusions on how women are different. But she is changing the way she presents the spiritual practice to some constituents.

"That's an insight that has really colored the way this place is developing, at least for me," she said. "I've really backed off a lot."

If you go
"Bridging Spiritual Practice And Study"
Dharma Talk led by the Rev. Teijo Munnich
When: 7-9 p.m. Oct. 15

Both events take place at House in the Pines on Isle of Hope. The cost of the sitting is $40. Donations can also be made to Munnich. To register, e-mail 2010@WingedWisdomWorkshops.com or call Susan Lamb at 912-660-0554. The deadline to reserve lunch is Oct. 13.