San Francisco, CA (USA) -- Kazuaki Tanahashi was still in his 20s, a self-described "arrogant kid," when he showed up at the Soto Temple in Japantown where a Japanese Buddhist priest was offering meditation lessons to a small but intense band of beatniks. 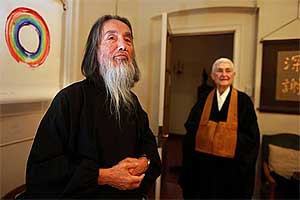 Tanahashi, a Japanese artist on his first visit to the States, asked the priest why he wasn't telling his Western novices about Dogen Zenji, a 13th century monk and the founder of the Soto School of Zen Buddhism.

"Dogen is too difficult for Americans to understand," the Rev. Shunryu Suzuki replied.

"Really?" Tanahashi replied. "If you are teaching foreign students, don't you think you should present your best? It doesn't matter if people don't understand it."

Tanahashi, now 77, sat down one day last week in a small meeting room in the San Francisco Zen Center at Page and Laguna streets. He stroked his long, wispy beard and laughed as he recalled his 1964 encounter with Suzuki, who would go on to become a key figure in bringing Buddhist meditation to a Western audience.

At Tanahashi's side was a freshly published, two-volume, 1,171-page translation of Dogen's masterwork, "Treasury of the True Dharma Eye" - the culmination of his 50-year collaboration with Japanese scholars and some of the Zen Center's best and brightest American teachers. Tanahashi has spent his entire adult life putting together this profound and poetic rendering - the complete works of one of Buddhism's most important teachers.

Tanahashi, who now lives in Berkeley, will be joined next weekend by an impressive array of scholars, artists and poets gathering in San Francisco for a series of public events celebrating the book's publication. There will be meditation instructions and a film about Dogen at the Zen Center, a panel and musical performance at Fort Mason Center, and a meditation and Sunday dharma talk (Buddhist sermon) at Green Gulch Farm at Muir Beach. (For a list of events, go to www.sfzc.org/ztf.)

Treasury of the True Dharma Eye" (Shambhala Publications; $150) is a monumental accomplishment, bringing together Dogen's essays on the essence of Buddhist teaching and detailed instructions on how to meditate or lead a monastic life, not to mention this medieval monk's paradoxical ponderings on the nature of time and space.

"He challenges us with an urgent question: How do we live each moment fully and meaningfully? He makes us feel not confined and tiny, but free and enormous," Tanahashi said.

Subject, object are one

Dogen (1200-53) is famous for having traveled to China in search of authentic Buddhist teaching. He returned to his native Japan stressing the importance of meditation, or "just sitting," rather than focusing on empty prayers and rote scripture study. He saw meditation as the only way followers of the Buddha could truly experience an enlightened state of "non-separation," which Tanahashi sees as the central tenet of Dogen's teachings. "In meditation," Tanahashi writes, "the body experiences itself not as separate from the mind. The subject becomes not apart from the object."

William Bodiford, a professor in the Department of Asian Languages and Cultures at UCLA, said Dogen thought of himself as bringing Buddhism to Japan for the first time.

"Japanese people had already been Buddhists for 600 years, but Dogen felt they hadn't fully grasped what Buddhism was really about," Bodiford said. "That's why Dogen is especially relevant for non-Japanese today. Even though Westerners have been studying, writing about and even practicing Buddhism for two centuries or more, Dogen's words force us to see Buddhism with new eyes."

Steve Stucky, the current abbot of the San Francisco Zen Center, said Dogen saw meditation as a way of "dropping your selfishness."

"He calls it 'dropping off body and mind.' We understand that as dropping off your preoccupations with yourself and your own ego. That can open up a vast world of possibilities."

Tanahashi's fascination with Dogen began in the late 1950s, when he was 25 years old and just making a name for himself in Japan with his calligraphy paintings. Raised like his father to be a Shinto priest, Tanahashi began looking for another kind of spiritual guidance. That's when he stumbled across some of Dogen's more esoteric essays.
Images
Kazuaki Tanahashi, shown at the San Francisco Zen Center,...Kazuaki Tanahashi (left) has devoted decades of his life,... View All Images (3)

"I didn't understand him," Tanahashi recalled, "but I could feel so much depth in his writings."

His work as a Dogen translator began a half-century ago, in 1960, when Tanahashi had a six-day show of his paintings in the Japanese city of Nagoya. He noticed with curiosity how an old man came to see his paintings every day. They started talking about Dogen, and it turned out the old man was Shoichi Nakamura, the head of the Zen Culture Institute.

"People used to say that there were only three people in Japan who understood the 'Shobo Genzo' (the Japanese name for "Treasury of the True Dharma Eye"). He was one of them, so I suggested that he translate it into modern Japanese," Tanahashi said. "He said, 'I will, but only if you help me.' "

Tanahashi was still working on that translation when he ran into Suzuki at the Soto Temple in Japantown in 1964. Suzuki invited him to give a talk on Dogen to the group of young American seekers that would soon grow into the San Francisco Zen Center. Suzuki died in 1971. His successor, Richard Baker, invited Tanahashi to return to San Francisco in 1977 and work for seven years as a scholar-in-residence. About four years ago, Michael Wenger, a longtime Zen Center leader, suggested that Tanahashi and the Zen Center work with Shambhala Publications to produce a complete translation of Dogen's work.

Tanahashi said Dogen's writings can sometimes seem hopelessly esoteric and impenetrable. Other times they appear dogmatic and obsessive. But patient students begin to appreciate his unique blend of ancient wisdom and postmodern insight.

"Body and mind are not separate. Matter and time are not separate, just as Einstein said. We can experience something extremely large in something very small, just like nuclear science shows us," Tanahashi explained. "If we become free of conventional ideas of self and other, subject and object, moment and eternity, we can find freedom and vast potential."