Dharamsala, India -- He's traveled quite a path. Former Rep. Bob Ney (R-Ohio) served six terms in Congress, then spent 17 months in federal prison for his role in the Jack Abramoff scandal. Now he is studying meditation at a Buddhist Temple in India. 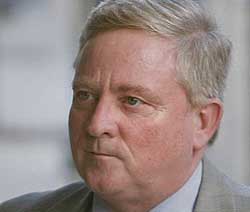 Ney, 56, told the National Journal in a phone interview that since September he has lived in a $10-a-day rented room in Dharamsala, the Dalai Lama's headquarters-in-exile for more than 50 years. The ex-congressman quit drinking, dropped 60 pounds and spends his days meditating with monks and learning the Tibetan language.

Ney, who pleaded guilty to conspiring to defraud the government and making false statements, said he started to try to meditate while in prison to help him cope with the stress of being locked up. Something about it clicked with him, he said, and now he practices meditation daily.

"You pick a quiet spot, as quiet as you can get," Ney told the National Journal. "You can do it any length of time you want. I usually do it about 10 or 15 minutes. And you focus on your breathing. ... Breath in, breath out. If you hear a sound, you acknowledge it and you just move on back to your breathing."

He said he plans to bring a Tibetan monk back to Ohio with him to train others in meditation. He wants to help the homeless, battered women and veterans suffering from post-traumatic stress syndrome.