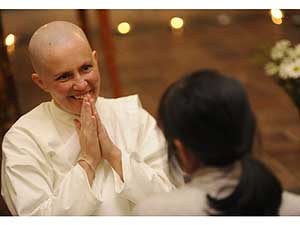 << Gwyn Waterfield became a Buddhist nun during a ceremony at Shove Chapel on the Colorado College campus on Saturday, Dec. 11, 2010. She is congratulated by her friend Ann Grant Martin. Several friends were on hand for the ceremony Waterfield gave up a secular life and her business and will be part of a new Buddhist group called Awakening Truth. The Gazette, Bryan Oller

Nine months ago, Waterfield was an Austin, Texas, business owner with 10 employees. She gave it up and most of her possessions to pursue becoming a Buddhist nun.

“I have some nervousness and fear about my new life,” Waterfield said, “but mostly I have an enormous amount of gratitude.”

After one year, Waterfield will be a novitiate, which requires, in addition to the precepts, prohibition from preparing food and driving a car. Two years from now, she may be an ordained Buddhist monastic, though the process usually takes longer.

Waterfield is the first to join the monastic arm of the nonprofit Awakening Truth, founded by Ajahn Thanasanti earlier this year in west Colorado Springs. Awakening Truth also offers Tava Sangha, a free meditation and talk from Thanasanti for lay people.

Monastics within the Thai Forest Tradition take a vow of poverty, making them dependent on donations for survival since they never charge for their talks and good works.

Donors pay the rent on Thanasanti’s small cottage and on an apartment, which doubles as Waterfield’s sleeping area and communal meditation site for lay people.

Everything Thanasanti and Waterfield eat has been given. One day it might be a McDonald’s meal, and on another it might be a chef salad from a family restaurant.

“You can’t show preference (for what you are given),” Waterfield, 40, said.

At the Precept Ceremony, Thanasanti said the purpose of the monastic life is “awakening.” Monks benefit society by revealing a path to a happiness deeper than anything the world can offer.

“We live in a world where self-discipline, restraint and self-renunciation are not popular,” Thanasanti, sitting cross-legged on a pillow, said. Monastics “open the door for people to question their choices. There is another choice.”

Raised on a ranch in Canadian, Texas, Waterfield got a double-shot of Christianity. Mom was a Roman Catholic and Dad a Methodist. Her teen and early-adult years were marked by drinking and drug use, she said.

Because of her wayward lifestyle, it took her a number of years to finish her math degree at St. Edward’s University, a Catholic college in Austin.

In 1998 she founded “Gwyndows,” a window-cleaning operation in Austin that quickly grew into a formidable residential and commercial business.

All the while she was exploring Buddhism. She practiced at Austin Buddhist centers and attended days-long retreats around the country.

“The world started to look different,” Waterfield said. “There is something transformative and powerful about sitting still.”

After attending a 10-day retreat in Cañon City this year run by Thanasanti, she made a decision. “I knew I had to pursue this,” said Waterfield, who has never been married.

About 50 people attended the Precept Ceremony. Waterfield’s mother, Gail, and her brother, Bruce, traveled from Texas.

The ceremony took place at an altar adorned with flowers, candles, and the statues of Buddha and Kuan Yin, the embodiment of compassion within the faith.

“I was prouder of her than I’ve ever been,” Gail Waterfield, 70, said after the ceremony. “The peace I see that has come over her is something that a mother prays her child will have.”

To learn about Waterfield’s daily life as a monastic, go to Barna’s blog, The Pulpit, at www.thepulpit.freedomblogging.com.