Large crowds have gathered at Pabaantad Temple where the famous monk died on 31 January at the age of 97. The cremation ceremony is scheduled for 5 March in the presence of Queen Sirikit

Bangkok, Thailand -- Soon after his passing early last Sunday, Ajahn Maha Bua's last will was revealed: it said all of his personal property and the money that may be donated at his funeral be converted into gold bars and given to the Bank of Thailand, to be added to the country's reserves. 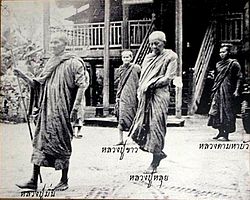 That will is unique, but not out of the ordinary. This is because after the 1997 economic crisis, when the country lost most of its close to US$30 billion reserves, Luangta Maha Bua led a series of campaigns to raise funds, in the form of gold and dollars, to help replenish the country's reserves. After 15 campaigns spanning a number of years, the final sum given to the central bank came to about 12 metric tonnes of gold and US$10.2 million. At today's rates, that gold is worth about half a billion dollars.

That is a large sum, indeed. Placed in the context of the country's finances, however, it is not. As a result, should a crisis similar to that of 1997 again arise, it cannot be of much help in fighting a run on the national currency.

But that apparently was not the intention of the venerable monk. His campaigns were aimed more towards getting Thais to focus on the causes of the crisis and, knowing the causes, they should change their behaviour to prevent such an event from recurring.

As the fundamental causes of that crisis were greed, corruption and selfishness, asking the people to part with their gold and dollars was one way of getting them to reduce their greed which had led to needless accumulation of property and made them vulnerable to corruption; and giving their donated gold and dollars to the central bank to replenish the country's reserves was a way of telling them to think more of the common good, not just their narrow self-interest.

The billions of baht worth of gold and dollars donated and transferred to the central bank may be taken as an indication that a lot of Thais are not entirely selfish. But how many of the donors were not selfish to begin with, and how many have changed their behaviour as a result of Ajahn Maha Bua's bidding, cannot be ascertained. One thing is clear: he saw that he could not change the contemptible behaviour of then prime minister Thaksin Shinawatra and of the people around him.

Uncharacteristically of him since he was known as a gentle and kind monk, Ajahn Maha Bua publicly condemned the government about 18 months into the first Thaksin administration, using language normally reserved for the basest of people. He also correctly predicted the turmoil that would befall the country as a result of their greed, corruption and selfishness. How he knew that is, of course, a matter of conjecture. Some people believe that since he was an arahant or saint, he could see into the future.

As I read about Ajahn Maha Bua and observe current developments of Buddhism in Thailand, I cannot help but think of another kind of will: his will to resist the temptations thrown at him by the material world.

A lot of his contemporaries, including some trained in the Forest Tradition by the venerable Ajahn Mun Bhuriddata, and younger monks have succumbed to such temptations.

Many have built elaborate temples, accumulated vast wealth and lived in luxury, and supported the creation of objects believed to possess supranatural powers such as amulets.

Ajahn Maha Bua had done none of those, although he could easily have. He preferred not to touch money and asked donors to put their funds into accounts that would finance worthy causes such as building hospitals. Ajahn Maha Bua is the last of the disciples directly trained by Ajahn Mun. His passing, therefore, signals the end of an era.

From now till March 5, when his body will be cremated, hundreds of thousands will travel to Wat Pa Ban Tad in Udon Thani, to pay their last respects. More will be watching on television and reading from newspapers and magazines about his life, his teachings, his personal conduct, and his funeral.

However one pays one's last respects to him, the most enduring way that I surmise he'd wish for, would be for us do some of his bidding.